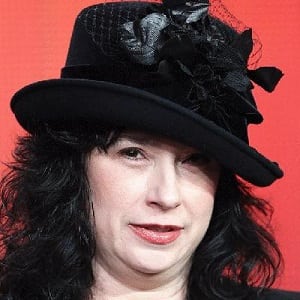 [on working conditions in Hollywood] If we based everything in Hollywood on who was a nice guy, holy moly, we would have no movies. No actors would work. This is not an industry that is ruled by kindness and generosity.

I think music on television is just uniformly dreadful. It is mundane, it says nothing. They use it to say, "Here's a funny moment!" like everyone's retarded, you know? It's not an extension of the drama, it's distraction. It's like, "I'll distract you, so you won't know how shitty the show is."

Amy Sherman-Palladino is a married woman. She is married to Daniel Palladino. Daniel has served as the co-executive producer, writer, and director on Amy’s shows. The pair does not have any children from this relationship. The marriage is going strong as there is no news regarding any extramarital affairs at present.

Who is Amy Sherman-Palladino?

Amy Sherman-Palladino is an American television writer, producer, and director. People mostly know her as the creator of the comedy-drama television series ‘Gilmore Girls’, and ‘The Marvelous Mrs. Maisel.’ Additionally, she is also the founder of Dorothy Parker Drank Here Productions.

Palladino was born in Van Nuys, Los Angeles, California as on January 17, 1966. She was born to parents Don Sherman and Maybin Hewes. Her mother was a dancer and her father was a comedian. Amy was trained in classical ballet since an early age. She is of American nationality. Furthermore, there are no details available about her ethnic background at present.

Palladino initially began her career as a staff writer on ‘Roseanne.’ Later, she worked on other sitcoms like ‘Love and Marriage’ and ‘Over the Top.’ In 2000, she began working as the creator and executive producer of ‘Gilmore Girls.’ Since then, she has worked on several other TV series. All in all, she has over 10 credits as a writer and more than 10 credits as a producer.

Some other television series that Palladino has worked on are ‘Bunheads’, ‘The Return of Jezebel James’, ‘Veronica’s Closet’, ‘Over the Top’, ‘Love and Marriage’, ‘Can’t Hurry Love’, and ‘City’ among others. Palladino also worked as a producer on the TV movie ‘The Wyoming Story.’ Furthermore, she also has 5 credits as a director.

Palladino has not revealed her current salary. However, she has an estimated net worth of around $ 40 million at present.

Palladino has not been part of any notable controversies in her career. Furthermore, at present, there are no rumors concerning her life and career.

Talking about her body measurement, there are no details available about Palladino’s height and weight. Her hair color and eye color is dark brown.

Palladino is active on Twitter. She has over 2.9k followers and has tweeted more than 11k times. However, she is not active on Facebook and Instagram.