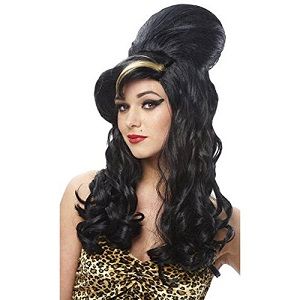 I could never decide whether I wanted to be Michael Jackson or marry him. I don't care what people say because he's a fucking genius

Amy Winehouse was a married woman. She dated chef-musician Alex Clare in 2006, but the relationship didn’t go well so they decided to separate in 2007.

Who is Amy Winehouse?

Amy was a five-time Grammy Award-winning English singer and songwriter. Her record-breaking songs include Rehab and You Know I’m No Good. Additionally, she was well known for her deep, expressive contralto vocals and her eclectic mix of musical genres, including the soul.

Winehouse was born in Southgate, London, England on September 14, 1983, she was the daughter of Mitchell “Mitch” Winehouse and Janis Winehouse, her father was a window panel installer and her mother was a pharmacist.  Additionally, she began working as a teenager, one of her initial jobs being an entertainment journalist for the World Entertainment News Network. She also sang with local bands. Shas a sibling namely, Alex Winehouse. She belonged to British nationality and Ashkenazi Jewish ethnicity. Her birth sign was Virgo.

Talking about her education, she was sent to the Susi Earnshaw Theatre School for four years to receive vocal education. Additionally, she also received training at the Sylvia Young Theatre School and also appeared in an episode of ‘The Fast Show’ along with some other schoolmates.

On talking about her profession, she began working as a teenager, one of her initial jobs being an entertainment journalist for the World Entertainment News Network. She also sang with local bands. During 2002, her friend Tyler James sent her demo tapes an A&R person who helped her sign with Simon Fuller’s 19 Management. In fact, even though she was meant to be kept a recording industry secret, her recordings were accidentally heard by the A&R man at Island/Universal who became keen on signing the young artist.

Whereas, she also released her debut album ‘Frank’ named in honor of her idol Frank Sinatra with Island Records in 2003. Additionally, the album featured a mixture of jazz, hip-hop and soul music. When the release of her debut album she plunged into a period of heavy drinking, drug addiction, eating disorders and mood swings which escalated during 2005. Similarly, her second album, ‘Back to Black’ was out in 2006. In addition, the single ‘Rehab’ was the first one released from ‘Back to Black’ in 2006. This song is about the troubled singer’s refusal to enter a rehabilitation center.

Additionally, she was a heavy smoker and drinker and used illegal drugs like heroin, ecstasy, cocaine, etc. which took a toll on her health. In addition, she canceled several of her shows and tours in 2007 because of ill health. Similarly, she claimed to have quit illegal drug use in early 2008 though she took up binge drinking. Consequently, her drinking habits worsened with time and fell into a pattern marked by periods of abstinence and then relapsing. The album debuted at No. 1 on the U.K. Albums Chart. She earns a decent amount of salary. Whereas, her net worth was around $ 10 million.

There was a controversy that, Amy Winehouse a hologram to go on tour accompanied by a live band. Currently, she was far from rumors and controversies.

On talking about her body measurements, Amy has a height of 5 feet 3 inches. Additionally, she weighs was 50Kg. In addition, she has a measurement of 35-26-34 inches. Amy’s hair color was black and her eye color was brown.

She died on July 23, 2011, at the age of 27 in Camden, London, England. The cause of her death was Alcohol intoxication.

Also, read the affair, salary, the net worth, controversy, and the bio of Jamie Cullum, King Princess, Weird Al Yankovic

The late Amy Winehouse’s ex-husband ‘scumbag’ Blake Fielder-Civil has sued her parents for a £1million stake in her fortune!