Amybeth McNulty is a renowned actress of series Anne with an E.

Amybeth McNulty is currently dating actor Louis Hynes. From the second half of 2018, the pair started uploading pictures of one another onto their respective social media handles.

The pair have not yet officially confirmed their relationship in the media but on April 4, 2021, McNulty posted a picture of them kissing each other. On the posts, Hynes has also commented, ” How did you photoshop it to make it look like we’re kissing? Love ya bud”.

However, her fans often linked her with her on-screen romance partner Lucas Jade Zumann. Also, Lucas has already a girlfriend named Shannon Sullivan. 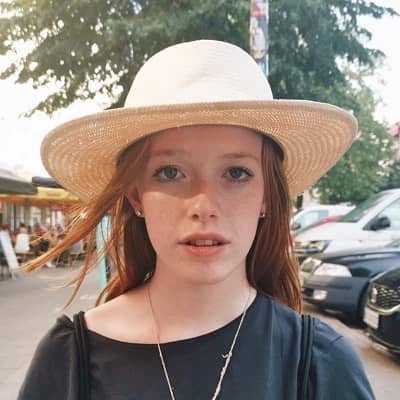 Who is Amybeth McNulty?

Amybeth McNulty is an Irish-Canadian renowned actress. She rose to fame for her starring role as Anne Shirley in the CBC/Netflix drama series Anne with an E.

She is starring in the upcoming movie, Maternal in the lead role of “Charlie McLeod” along with Laura Vandervoort.

Amybeth was born in the town of Letterkenny, Donegal, Ireland on November 7, 2001. She holds dual citizenship of Irish and Canadian. Her ethnicity is Irish.

She is the only child of her parents Siobhan (mother) whereas the identity of her father is unknown. Nonetheless, her father is Irish and her mother is Canadian.

Talking about her academics, she has never been to a regular school because of her acting career. She has been homeschooled all her life.

Amybeth started her career as a stage artist with a performance of ballet and amateur in Paul Boyd’s musicals at An Grianan Theatre. She appeared in the lead role of Marta von Trapp in a production of the musical, The Sound of Music at Regent’s Park Open Air Theatre in London.

At the age of 13, McNulty auditioned for a role in the 2014 American supernatural horror film, Annabella. On her Instagram live session, she revealed that she was also offered a role in HBO’s fantasy drama series “Game of Thrones”, but she rejected the offer because she did not want to wear real fur being a vegetarian.

In 2014, she made her on-screen debut in both film and television. She cast in the role of “Young Agatha” in the television series, Agatha Raisin. That year, she also appeared in the film, A Risky Undertaking as Ariadne Pleasent.

A year after, she features in the role of “Jenny Rane” in the four-part RTÉ One series ‘Clean Break’. She also played the role of Sputnik in a couple of episodes of CBBC’s sci-fi series ‘The Sparticle Mystery. In 2017, she cast in the main role as “Anne Shirley” in Anne with an E, based on the 1908 novel Anne of Green Gables by Lucy Maus Montgomery. She played the role for 27 episodes from 2017 to 2019.

To date, McNulty has not been part of any sorts of rumors and controversy that create headlines in the media. Also, she stays miles away from such controversial acts that could hamper her personal and professional life.

As per other online sources, McNulty has a net worth of around $1 million throughout her profession as an actress. Similarly, her average salary is around $50.24 thousand.

The actress has a well-maintained body posture with a fair complexion. She stands at the height of 5 feet 4 inches tall and her weight is 48 kg.

She has blonde hair but she dyed her hair into reddish for the role of Anne Shirley in Anne with an E. Furthermore, she has a hazel blue color pair of eyes.

Likewise, she has a self-titled YouTube channel with nearly 661k subscribers. However, she is not available on Facebook but has a Facebook fan page with over 10.5k followers.