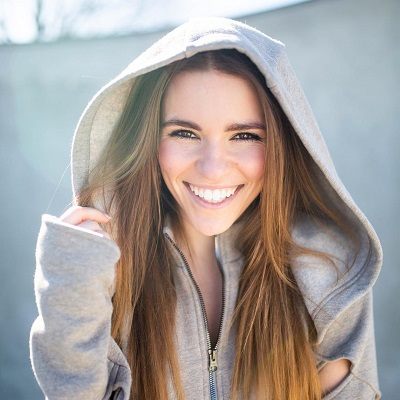 Amymarie Gaertner’s current relationship status is possibly single. When it comes to a relationship, she loves to keep things quite a low profile. Perhaps, she might be waiting for Mr. Perfect of her life.

Her Instagram posts suggest that the YouTuber is lively, passionate about dancing, traveling, and arts. Also, she has a soft corner for dogs in her heart and also has a pet dog, Honey.

Who is Amymarie Gaertner?

Amymarie Gaertner is a dancer, Youtuber, and actress. She is renowned as Vanessa of Dance Camp.

Last, in 2017, she appeared as Audrey March of the TV series, Guidance.

She was born on the 5th of August 1994 in Ohio, United States. She is of German ethnicity.

Details regarding his father, mother, and education are not revealed to the date.

When Amymarie Gaertner was a child, she has a keen interest in dance. As per her, the earliest memory that she had about dance is that when she was four years old. Since that, she has been dancing. In the basement, she had made a small studio of her where she practices her dance. Unlike any other dancer, she is self-taught when it comes to dancing.

She created his own YouTube channel on the 1st of March 2008. Later, she uploaded her first video back in 2011. At the time, she used to upload her video of some talent shows.

Moving forward, she uploaded another dance vine that gripped the attention of many people. Her amazing and flawless dancing moves in such videos earned many views. Some of her most viewed dancing videos include Amymarie Dance Vine Compilation, CHILLSTEP FREESTYLE DANCE, and OH MIAH DUBSTEP FREESTYLE which has over a million views.

Apart from dancing videos, she also uploads makeup tutorials and vines too.

In 2015, she appeared in the TV series, Sanders Short along with Thomas Sanders. In the following year, she featured in the movie, Dance Camp. In the comedy-based drama, she portrayed the character of Vanessa.

Last, in 2017 she was cast in the TV series, Guidance. As Audrey March, she appeared in three episodes altogether.

Amymarie Gaertner has brown eyes with light brown hair. She stands at a height of 5 feet and 6 inches and weighs 56kg.

To date, she has not been through any sort of controversy that created a buzz in the media.

However, there were rumors that she is dating the social media star, Logan Paul. However, she cleared that they are not dating each other and they are friends who like each other company.