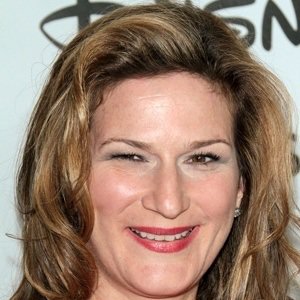 I always loved comedy but I didn't start formally until I was in college.

I've always lived in a city. I'm very social, and in a place like New York, even if you're alone on the subway, you never feel lonely.

I'd like to say that parody is a celebration of a person's specific characteristics, as opposed to mockery.

Ana Gasteyer is a married woman. She has been married to Charlie McKittrick since November 9, 1996. The couple has welcomed two children: daughter Mary in June 2002 and a son Ulysses in March 2008. The family is living together and there is no sign of divorce between the couple as well.

Who is Ana Gasteyer?

Ana Gasteyer is an American actress. She is popular for her performance on ‘Saturday Night Live’ from 1996 to 2002. Also, she is well known for her roles in ‘Suburgatory’, ‘Lady Dynamite’, and ‘People of Earth’.

Ana holds American citizenship and her ethnicity is a mix of English, German, Greek, and Romanian.

She debuted her acting career from the starring role of a woman in an American sitcom ‘Seinfeld’ in 1995. Then, she appeared in the series ‘Saturday Night Live’ from 1996 to 2002. She also made her appearances in the TV shows like ‘Hope and Gloria’, ‘Party of Five’, and ‘NYPD Blue’.

Ana Gasteyer has debuted her feature film from the role of a mother in the film ‘A Small Domain’. She appeared in the films like ‘Meet the Deedles’, ‘Mad About You’, ‘Robot & Frank’, ‘Fun Size’, ‘Peeples’ and recently, she portrayed the role of Catherine in the film ‘Wine Country’ in 2019.

She has an estimated net worth of around $2 million and she has earned that sum of money from her professional career. The films in which she played, ‘Woman on Top’ earned $10.2 million and ‘What’s the Worst That Could happen?’ earned $38.4 million.

There is a rumor that she will be returning to ‘Curb Your Enthusiasm’. But, she said that she has no idea about her returning to the series.