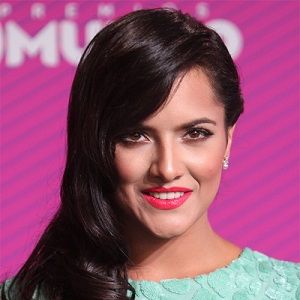 Ana Lorena Sanchez is single as of now. Previously, she has been into a relationship. She was in a short-lived relationship with Julián Gil.

Julián is a famous Argentine-Mexican actor, TV host and a model. He is popular for TV shows like “Eva Luna,” “Hasta el fin del mundo,” and others. The ex-couple started dating in 2015. They stayed together for a while. But soon after, things started falling apart. As a result, in 2016, they got separated.

Talking about her present relationship status, she is single. There is no sign or news regarding her affair with anyone. Currently, she is enjoying being single.

Who is Ana Lorena Sanchez?

Presently, she is a well-known celebrity in the industry for her role in a Spanish-language TV show, “Cosita Linda.” She played the lead role of ‘Ana Lorena Rincón’ in the show.

Similarly, she is also known for featuring in projects like “Relaciones peligrosas,” and “Tierra de reyes.”

Ana Lorena Sanchez was born in Mexico City in Mexico. Her birth date is August 14, 1990. She was born with the name ‘Ana Lorena Sánchez Mondragón.’ Currently, we don’t know about her parents and ethnicity.

Although her work is visible in the media, information regarding her childhood and early life is behind the curtain. Similarly, she has always ignored to share the details regarding her family life and her growing up period.

Ana Lorena Sanchez is an actress by profession. She made her acting debut in 2012. In 2012, she featured in the American Spanish-language TV show, “Relaciones Peligrosas.”

She portrayed the recurring role of ‘Elizabeth Gomez’ in the show. Then in 2014, she featured in a TV show, “Tu día alegre” as herself. She worked hard on every project.

Finally, in 2014, she got the lead role in the Spanish-language television series, “Cosita linda.” Furthermore, she featured in TV shows like “Tu Dia Alegre,” “Demente Criminal,” and others.

As of now, she has a good amount of salary and net worth from her TV shows and film. Subsequently, she has been able to make some fortune for herself. Unfortunately, we don’t know about these stats.

Moving towards her body measurements, Ana Lorena Sanchez has a slim body. She maintains her stunning personality. She has an average height of 5 feet 4.5 inches. Her eye and hair color is dark brown.

Similarly, her body figure looks like a perfect combination of height, weight, and curves. But as of now, stats on such stats are not available.