Updated On January 29, 2023 | Published By: Donald Golden
Share this
Divorce 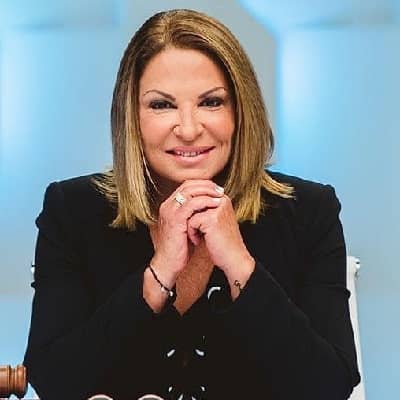 What is the relationship of Ana Maria Polo?

Talking about her love life, Ana Maria Polo was married at the age of 19 years to a man whose identity is still unknown to the media. The couple had a son named Peter. Sadly, they separated after having a baby.

She also made headlines after a report appeared in a magazine mentioning that she is in a relationship with her personal assistant and executive producer of Caso Cerrado, Marlene Kay. However, none of them have confirmed their relationship with Kay.

As per the news, the couple has been in a relationship for more than 25 years. However, none of them have confirmed it.

Who is Ana Maria Polo?

Moreover, she was nominated for a Daytime Emmy Award for Outstanding Legal/Courtroom Program.

How old is Ana Maria Polo?

Ana Maria Polo was born on 11 April 1958. At present, her age is 63 years old. Likewise, her birthplace is Havana, Cuba.

Ana is the daughter of her father, Joaquin Polo whereas her mother is Delia Polo.

Talking about her nationality, Polo holds an American- Cuban identity whereas her ethnicity is Cuban-American-Hispanic.

Regarding education, the television personality graduated from the University of Miami School of Law in the year 1987. She is also a member of the Florida Bar.

Professionally, Ana became a member of Florida Bar and started exercising her career in Miami-Dade County after her graduation. She worked as a family mediator in different cases, ranging from divorce, adoptions, and custody to domestic violence. She also served for the law firm, Emmanuel Perez & Associates, P.A. in Coral Gables, Florida.

Besides her career, Maria Polo has been actively working in fighting for human rights and against discrimination. Polo has been also listed as one of the most influential Hispanic personalities in the world.

Talking about her career in Caso Cerrado, the show began premiering on 2 April 2001 on the Spanish-language network Telemundo. It is the first Spanish language program nominated for a Daytime Entertainment Emmy Award.

How much is the net worth of Ana Maria Polo?

A talented American-Cuban personality, Polo has earned a handsome amount of money from her multiple profession. She has been active in her profession from the year 2001 till the present.

It is reported that Ana Maria Polo has an estimated net worth of $3 million as of 2022.

The producer of Caso Cerrado, Marlene Kay, and Ana has controversy between them. Things got even uglier when Kay claimed Polo with a $2 million claim over the rights to the name of the TV show.

Other than that, Ana has never been part of any controversial matter or rumors till now. Maria has been preoccupied with her professional and private life.

61 years old television personality, Ana has gorgeous looks and an admirable personality. She stands at a height of 5 feet 8 inches. Also, she has a balanced body weight of 58 kg.

Furthermore, Polo has blue eyes whereas her hair is blonde. Her body measurement is 35-25-36 inches(chest-waist-hip) respectively.

Regarding her social media presence, Ana Maria Polo is an active personality on social media. Ana has more than 2.3 million followers on her official Instagram account @anapolotv.

She is also active on Twitter with around 944.4k followers. She owns a YouTube channel named Ana Polo and it has gained more than 79.2k subscribers at the moment.

Moreover, Polo is also available on Facebook with nearly 14 million fans and supporters. The star has more than 2.7 million followers on her official TikTok account.