Updated On November 23, 2022 | Published By: Rounak Kumar
Share this 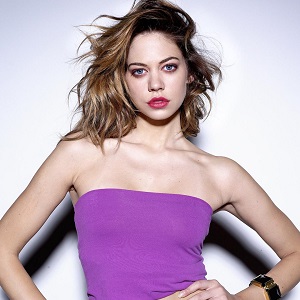 I am proud to announce I am queer and I identify as non binary. hope to give as much love and support back to those who continue to show love and support for the Pride community at large. 🏳️‍🌈❤️ Lio.

I'm not a fighter. If there's something going on that I really feel strongly about, I'll certainly stand up but I pick my battles

I kind of do this awkward body language because, growing up, I had a really hard time expressing myself vocally

I'm a big music person. I compare a lot of my emotions to how something sounds.

What is the relationship of Analeigh Tipton?

Previously, they dated Chaz Salembier. Chaz is a creative executive of The Walt Disney Studios.

She was in a relationship with Jake McDorman. They started dating in September of 2014. They were co-stars in the show, Manhattan Love Story. It was after the separation from Aaron. However, they broke up.

Previously, she was engaged to Aaron McManus in 2013. But things didn’t work out between them. And they got rid of each other in 2014. However, they called off their engagement.

Who is Lio Analeigh Tipton?

Florida-born Lio Tipton is an actress. Additionally, she is also a fashion model and a figure skater. They started their professional career in 2008.

Presently, she is a prominent figure among the media for appearing in the American romantic comedy film, “Crazy, Stupid, Love”. She is also famous for her roles in the film, “Warm Bodies”. She plays the role of Nora in the film.

She has Caucasian ethnicity and details about her parents are not disclosed.

She did her schooling in Placerville. Afterward, she attended St. Francis High School. After her graduation there, she enrolled at Marymount College of California University. Also, she also studied at the New York Film Academy.

Lio Analeigh Tipton is indulged in multiple careers. She is a model, skater, and actress. She started skating at the age of 2 and a half. The talented Analeigh took part in the “U.S. Synchronized Skating Championships” four 4 times. Later she also won Regional Skating Championship. But at 16, she retired from professional skating.

Analeigh is also a model. She was the participant in America’s Next Top Model in Cycle 11. She did a good job and finished 3rd. This boosted her career. She worked with Different modeling agencies. She featured on “Vogue” and “Maxim”. Then she also appeared in advertisements for “Forever 21” and “Guess”. She appeared in several TV series like “Big Bang Theory”, “Hung”, “Limitless”, and others.

Furthermore, she is also an actress. She made her film debut in the film, “The Green Hornet” in 2011. The same year she featured in the romantic comedy film, “Crazy, Stupid, Love”. She portrayed the role of Jessica Riley. This gained her huge recognition in Hollywood. Afterward, she portrayed several roles in films like “Lucy”, “Warm Bodies”, “Between Us”, “Viral”, and others. She gained huge popularity and appraisal for her role in the film, “Two Night Stand”.

Her multiple professions earn her a pretty good amount of salary. Presently, she is estimated to have a net worth of $1.5 million.

Is Analeigh Tipton involved in any rumors and controversies?

Lio Analeigh focuses on her career. She tries to avoid and ignore any media controversies through a low-key lifestyle. She lives her personal life in the media limelight. Eventually, she is able to keep herself apart from any rumors related to her personal life as of now.

Lio Analeigh Tipton has a sexy figure. She stands tall at an incredible height of 5 feet 10 inches. Similarly, she has a stunning figure with 34-24-34 body measurements. She weighs around 52 kg or 115 pounds. Her hair color is brown and her eye color is blue.

Sarah Hyland: the latest victim of the nude hacking and online leak scandal! Click to grab the details!