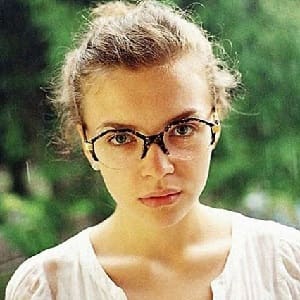 Anastasia Deeva is a married woman. She is married to George Deeva. The pair married on May 21, 2016. They do not have any children from this relationship. Their marriage is going strong as there is no news regarding any extramarital affairs at present.

Who is Anastasia Deeva?

Anastasia Deeva is a Ukrainian former model, politician, and diplomat. People mostly know her as the youngest person to hold the post of a deputy minister in Ukraine. After her appointment, popular news outlets such as the BBC and the New York Times ran stories featuring her.

Deeva was born in Oster, Ukraine on March 2, 1992. There are not many details available about her early life and childhood at present. Deeva is of Ukrainian nationality. Furthermore, no information is available at present regarding her ethnic background.  She has a sister named Sonya Shmalko.

Talking about her education, Deeva attended the prestigious Klovsky Lyceum school. In addition, she graduated with a high school degree in 2009. Furthermore, she also joined the Kyiv National Taras Shevchenko University where she completed a Bachelor’s and subsequently a Master’s Degree. Eventually, she graduated with a Master’s Degree in Political Science and Government.

Deeva initially took up several jobs while pursuing her studies. She had her first stint as an intern at the Ukrainian Parliament, Verkhovna Rada. This was while she was doing her BA-level studies. Additionally, Anastasia worked in the committee on European integration as an intern. In addition, from February 2012 to February 2013, she worked as an assistant to the Ukrainian MP, Leonid Kozhara. She also worked as an Assistant at the Ministry of Foreign Affairs.

Furthermore, Deeva joined a Swedish clean-tech and green energy company named Record Concept. She was appointed Advisor to the Minister of Internal Affairs of Ukraine in May 2016. Additionally, Deeva has also worked as a Communication Coordinator and Contractor at Engility Corporation. She became the Deputy Minister for Ministry of Internal affairs of Ukraine in November 2016.

Deeva has not been linked with any award nominations in her career.

Deeva has not revealed her current salary. Furthermore, there are no details available about her estimated net worth.

Deeva became part of several controversies after her naked photos surfaced online and were picked up by tabloids. She suffered a social media backlash and uproar in Ukraine. In addition, Deeva’s credentials to be appointed as a Deputy Minister were also questioned by her critics. She as accused of being unfit for the job. At present, there are no rumors concerning her life and career.

Talking about her body measurement, Deeva has a height of 5 feet 8 inches. Additionally, her hair color is dark brown and her eye color is blue.