She is the first-ever female member to serve on a full-time basis with a Hockey Night in Canada studio.team. 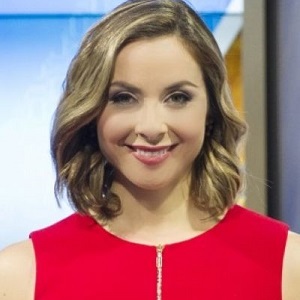 Andi Petrillo is a married woman. She is married happily to Jon Conway. After her marriage, her life has been changed and she has managed both her personal and professional life with the support of her husband. However, there is no updated information about their children and current relationship status.

Who is Andi Petrillo?

Andi Petrillo is a Canadian sports broadcaster and she is the first-ever female member to serve on a full-time basis with a Hockey Night in Canada studio.team.

She was born on April 9, 1980, in Toronto, Ontario. She was given a birth name as Andria ‘Andi’ Petrillo. Her grandmother was a popular actress during her period. Her father helped her and supported her to make the proper decision in her life.

Her grandparents shifted to Canada from Italy. She is always focused on her future and about her career. She loves to read books and loves cooking in her free time and also playing with her dog.

There is no information available about her education history. However, it is under review.

She started volunteering at her local television station, Rogers Cable York Region in Ontario Canada when she was 19. She used to work behind the scenes on various shows like sports, news, politics, and entertainment.

She was finally given an offer on the magazine show ‘York Region Living’ and she hosted the restaurant segment. People often used to make a joke out of her within her working times during the early period.

Petrillo joined Leafs TV and served as a reporter for the game between Toronto Maple Leaf’s and the Toronto Marlies in 2006. She got the opportunity to do sideline reporting for the 2008 National Lacrosse League championship game.

She made her way to Haiti on behalf of MLSE to deliver supplies of the earthquakes in 2010 and moved to Afghanistan help lift the morale of the soldiers along with the former NHL players and the Stanley Cup.

She joined Hockey Night in Canada for the 2011-12 NHL season and she hosted the iDesk portion of the broadcast. She also anchored CBC’s coverage of the 2014 Winter Olympics in Sochi Russia and the 2014 FIFA World Cup.

Petrillo with veteran sportscaster Scott Russell co-hosted the show ‘Road to the Olympic Games’ on October 24, 2015. She then joined TSN on February 18, 2016, as the new radio voice for Leaf’s Lunch on TSN 1050, and she became the first ever woman in Canada to have her own daily sports talk radio show. She was a pre-game host for MLS Cup 2016 and she will remain with CBC as one of their Olympic hosts.

Andi Petrillo: Net Worth and Salary

She has been earning a decent amount of salary from her career and her present net worth is close to millions. But her exact net worth is hard to predict.

She has not been involved in any rumor and controversies in her private life as well as in her professional life.

She has a perfect height of 5 ft. 9 inches and she has got light brown eyes and dark brown hair. Other information regarding her body measurement, dress size, shoe size is not available.