Updated On November 18, 2022 | Published By: Smriti Sharma
Share this
Married 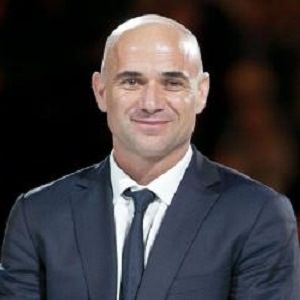 If either of us woke up as the other one, we would probably go back to sleep, praying it was a dream.

I've had those years where tennis hasn't been the top priority. There can be some regrets there, but I think that has saved me for the long run. I think my best tennis can still be ahead of me.

played well in Australia, played well last week. You know, was playing well this week but just ran into a guy that played a lot better.

Tennis is lonely. I would have been better off in a team sport. When I started to make a difference in children's lives, I felt like I finally had my team.

He wrote about the relationship in his 2009 autobiography, “We agree that we’re good for each other, and so what if she’s twenty-eight years older? We’re simpatico, and the public outcry only adds spice to our connection.

Moreover, he was married to Brooke Shields in 1997, but the marriage didn’t last long in 1999.

Then, he married Steffi Graf on October 22, 2001, at their Las Vegas home; the only witnesses were their mothers. They have two children: son Jaden Gil (born 2001) and daughter Jaz Elle (born 2003).

Who is Andre Agassi?

He has also been called the greatest service returner ever to play the game and was described by the BBC upon his retirement as “perhaps the biggest worldwide star in the sport’s history”.

Likely, Agassi is also an eight-time Grand Slam champion and a 1996 Olympic gold medalist, as well as being a runner-up in seven other Grand Slam tournaments.

Andre Agassi was born in Las Vegas, Nevada, the United States on  April 29, 1970. His birth name is  Andre Kirk Agassi and he is currently, 52 years old.

Talking about Andre’s educational history, he attended American School. At the age of 13, he joined Nick Bollettieri’s Tennis Academy in Florida.

Agassi then dropped out of school in the ninth grade to pursue a full-time tennis career.

Talking about his profession, in 1986, at the age of 16, he became a professional tennis player and played at La Quinta, California.

In 1987, he tasted success for the first time at Sul American Open in Itaparica, after which he was ranked World No. 25.

On 1990, the United States won Davis Cup after 8 years and Agassi was part of the winning team. In the same year, he won the prestigious, ‘Tennis Masters Cup’.

Similarly, in 1993, he won his first and only doubles title, while playing with Petr Korda at the ‘Cincinnati Masters event.

In the year 1994 US Open, after his wrist surgery, he became the first ‘unseeded’ player to win the Grand Slam, beating Michael Stich in the final.

For the first time in his career, after winning the 1995 Australian Open, he rose to the rank of World No. 1.

In the year 1995, he won three ‘Master Series events and seven titles.

Whereas, his career went through a slump in 1997 and he played only 24 matches owing to recurring wrist injuries. Due to this problem, his rankings plummeted from no. 1 to no. 141.

In 1998, his career turned for the better after playing in the ‘Challenger Series Tournaments’. His ranking rose to world no. 6 and in 1999, he also won two Grand Slams—the French Open and the U.S. Open.

Likewise, in 2006, he was recovering from an ankle injury and was also suffering back and leg problems, due to which he couldn’t play for a while.

On September 4, 2006, though he lost his last match to Benjamin Becker of Germany at the U.S. Open, he received a standing ovation for his long and brilliant career in tennis.
Post-retirement, he played for the ‘Philadelphia Freedoms and also the ‘Cancer Treatment Centers of American Tennis Championships.

His autobiography bagged the No.1 slot on the ‘New York Times Best Seller list’ and also won the ‘British Sports Book Awards in 2010.

Andre has not revealed his current salary. However, he has an estimated net worth of around $175 million as of 2022.

Andre Agassi is successful in maintaining his career and has not been part of any rumors and controversies yet.

Andre Agassi has a height of 5 feet 11 inches. Additionally, he weighs is 82Kg.

He is Bald and his eye color is dark brown.

Being an American tennis player Andre Agassi has a huge fan following rate.