Talking about his relationship details, Andre Hall is presently in a relationship with his longtime partner, Sunny Poi. The two have been friends for more than twelve years and are dating for one year.

Moreover, Andre often shares his happy moments with her partner on Instagram. Other than that, he has been secretive about the details of his relationship. 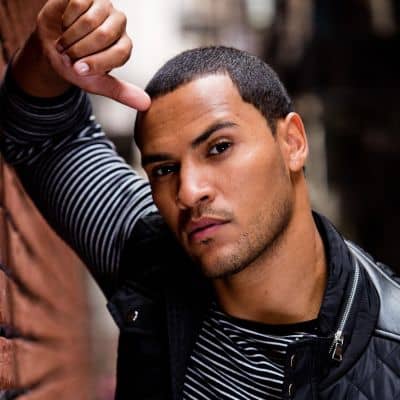 Who is Andre Hall?

Andre Hall is a well-recognized American actor and model. Hall is widely famed for his role as Keri Lewis in the Toni Braxton Biopic, Unbreak My Heart and as Danny Harris in the Tyler Perry sitcom, Love Thy Neighbor.

Andre Hall was born on 3 September 1982. At present, he is 39 years young star. Likewise, his birthplace is Indianapolis, Indiana, the USA.

Not much is known about his father and mother’s details, Andre has been secretive towards his family details. Moreover, he has not stated his sibling’s information in the public.

Talking about his nationality, Hall holds an American identity whereas his ethnicity is African-American.

Regarding education, the star might be well-educated. He has not mentioned his academic background to the public.

Andre began his professional career in 2011 featuring in Time of Possession in the role of Jerry. It is a short movie and next year he performed in another short movie, named Far where he portrayed the role of David.

Moreover, Hall has performed in Boo! A Madea Halloween in 2016. It is a 2016 American comedy horror movie directed, written, and produced by Tyler Perry. The movie starred stars like Tyler himself, Cassi Davis, Patrice Lovely, Yousef Erakat, Lexy Panterra, and Andre. Andre has portrayed the role of Quinton.

The star has also appeared in the popular television series created by Tyler, Love Thy Neighbor from 2013 to 2017. Love Thy Neighbor is a popular American television sitcom broadcast that aired on Oprah Winfrey Network. The series featured some great faces such as Patrice Lovely, Palmer Williams, Kendra C. Johnson, and Andre.

A famed American star, Hall has earned a handsome amount of money from his profession. He lives a quality lifestyle along with his family.

As per celebrity net worth, Andre Hall has an estimated net worth of $2 million. He has also appeared in advertisements for several brands which include Nike, Bose, UGGS Australia, and many more.

Andre has never been part of any controversial matter or rumors till now. The star has been preoccupied with his professional and private life.

It seems that Hall prefers enjoying his personal life and does not want to merge it with his professional life.

39 years young star, Andre has handsome looks and an admirable personality. He has not mentioned his exact height but seems to be more than 6 feet tall.

Furthermore, Hall has brown eyes whereas his hair is black.

Regarding his social media presence, Andre Hall is an active personality on social media. Andre has more than 27.8k followers on his official Instagram account @ahall382.

He is also active on Twitter with around 21.3k followers.