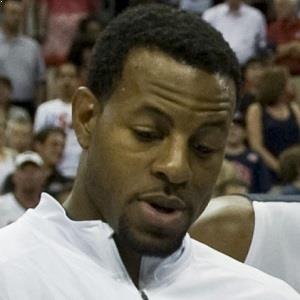 I want to dominate a little more, just be a level beyond everyone else. I expect that from myself

Not even thinking about anything. My mind is a blank. We just want to enjoy the moment

The common denominator is that we have guys who are really hungry to show what they can do.

Reflecting on a personal life of Andre Iguodala, he is married to his childhood sweetheart Christina Gutierrez. The couple got into a married relationship in August 2015 after being in a romantic relationship for several years. They got married at the One&Only Palmilla in Los Cabos, Mexico. They have been blessed with one son Andre II. He has one daughter named London from his previous relationship with Clayanna Warthen. He is living a happy married relationship having no rumor on their separation. Being a celebrity, his personal stuff is always a matter of discussion and interest to the public.

Who is Andre Iguodala?

Tall and handsome Andre Iguodala is a well-known American professional basketball player. He is best known as the player from Golden State Warriors of the National Basketball Association (NBA)wearing a jersey number 10. He often plays from small forward and shooting guard position.

The son of Linda Shanklin, Andre Iguodala was born in Springfield, Illinois.  He was born on 28 January 1984 and named as Andre Tyler Iguodala.

He is of African American ethnicity and has an American nationality. He has an elder brother Frank who is also a player.

He studied at Lanphier High School where notable athletes were produced. After graduating high school he joined the University of Arizona.

Talking about career journey of Andre Iguodala, he has been active in the professional basketball game since 2004 and he is still engaged in it. He started playing basketball professionally after being selected by Philadelphia 76ers in the 2004 NBA draft. Upon his draft, ESPN personality Dick Vitale said it was a mistake for the 76ers to select Iguodala because he was a three-point line shooter and he’s not going to be able to play.

He took it as a motivation and started to work hard. As a result, he finished fourth in the NBA Rookie of the Year. He won the MVP honors for his 30-point performance in the sophomores win. On 17 August he signed a six-year contract extension worth $80 million with the 76ers. He took a week-long internship with Merrill Lynch during 2011 NBA lockout. He was also a team member of the national team that won a gold medal in 2010 FIBA World Championship.

On 10 2012, Iguodala was traded to Denver Nuggets but soon left the team to join Golden State Warriors. On 5 July 2013, he signed a four-year contract worth $48 million with the Warriors and since then he has been playing from the team Warriors.

Andre Iguodala: Salary and Net Worth

He has accumulated a net worth of‎ $28 million. But there is no information regarding his salary.

He suffered a controversy when he said he didn’t want her daughter to play basketball at school in case she became a lesbian.


Andre Iguodala has the height of 6 feet 6 inches. His body weighs 98kg. He has black hair and black eyes.