Posted on December 7, 2021 | In Married , Relationship , Wedding
Share this 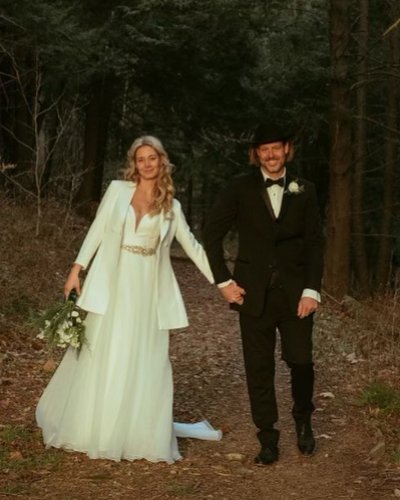 Andrea Cargill and Steve Ford are happily married! They married on 5th December 2021 in a winter woodland-inspired ceremony at a resort outside of Pittsburgh.

They wed outdoors at the Seven Springs Mountain Resort with a beautiful view of Pennsylvania’s Laurel Mountains. Their wedding was attended by a small number of friends and family members.

“I’m [so excited] to be married to Andrea. I’m looking forward to starting a family and taking on life together as husband and wife.”

Their wedding came less than a month after their engagement on 11th November. He proposed to her in their garden with his grandmother’s ring which was passed down in his family.

Also, the guests headed for the intimate reception which was held at the resort’s acclaimed restaurant, Helen’s located inside a rustic-chic 1930s cabin. It was the resort’s original owners called home.

The reception venue was decked out with moody candlelight, fresh greenery, dark wood features, and a blazing fireplace. They kept a sign ‘The Fords’ Love Shack’ and also bought an oversized disco ball.

More on the wedding of Andrea Cargill and Steve Ford

“I love the classic wedding traditions and we’re planning to do many of them on our big day. My Dad is giving me away, we are being married by a pastor who is a close friend of the Ford family and we’ll be doing the first toast, cake cutting and throwing the bouquet. I’m also doing ‘something old, something new, something borrowed and something blue’ for good luck.”

Likewise, their wedding day happened to be Steve’s birthday which made the ceremony more special. They did not plan to marry on his birthday but things worked out in that way.

Even though they are married, they do not have any plans for their honeymoon but are more than excited to start a new chapter of their life. Talking of Andrea, Steve said that she is the thoughtful and most beautiful person he knows.

Also read All about the wedding of Ben Higgins and Jessica Clarke!

Tags : Restored by the Fords Wife of Steve Ford