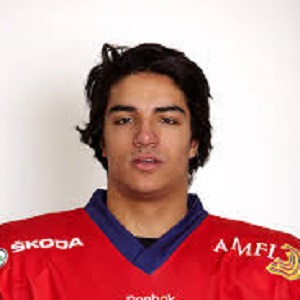 Andreas Martinsen has kept his personal life private and out of the spotlight. He usually doesn’t talk about his private life in media and public. This is known that he is a married man. His wife’s name is Camilla Jørgensen. There is no other information on their relationship details.

Who is Andreas Martinsen?

Andreas Martinsen is a Norwegian professional ice hockey forward. He currently plays for the Montreal Canadiens of the National Hockey League (NHL). He has played several games for the Norwegian national team. He was first elected to compete on the international stage as a junior for Norway at the 2007 World Under-18 Championships. He is one of only two Norwegians in the NHL.

Andreas Martinsen was born on 13 June 1990, in Bærum, Norway. His nationality is Norwegian and he is of Ugandan-Norwegian ethnicity.

His educational background is unknown to the media.

Martinsen made his first-team professional debut with Lillehammer in the 2007–08 season at the age of 17. He played for the team until the 2011–12 season. The following season, he joined Düsseldorfer EG of the German professional league Deutsche Eishockey Liga. He spent three seasons there. He played for the San Antonio Rampage for a season. Andreas was signed by the NHL team Colorado Avalanche in 2015.

He signed a one-year, two-way entry-level contract with the Colorado Avalanche on 15 May 2015. He made his NHL debut the following day in a 4-0 victory over the Philadelphia Flyers. Since the 2016-17 season, he plays for the Montreal Canadiens of NHL. Martinsen was first selected to compete on the international stage as a junior for Norway at the 2007 World Under-18 Championships. He made his senior international debut for Norway as a 20-year-old at the 2010 IIHF World Championships. He has appeared in each World Championships since, marking 7 consecutive Championships as of 2016.

Andreas Martinsen: Salary and Net Worth

His net worth is unknown to the media. He has an annual salary of 650,000 dollars.

He has a good height of  6 feet 3 inches with a bodyweight of 104kg. He has black hair color and his eye color is dark brown.