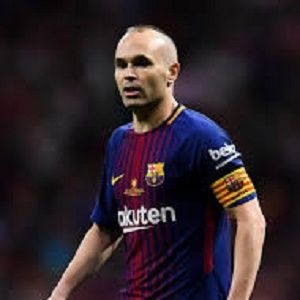 Perfection doesn't exist.: Some people like you, some people don't. In the end, you just have to be yourself.: If you win without sacrifice you enjoy it but it's more satisfying when you have struggled.: I like to watch soccer, no matter what teams or players are in the field. La Masia is a place where lots of people live together but you are on your own.

I get the feeling people to respect me and that there is affection for me. That makes me happy.

My father has made a museum with my cuttings and photographs. If there is one thing that all players have in common it is that winning, competitive gene: the ability to overcome obstacles and fight for what you want from your career. There is no rule that says a footballer needs to be 'this high' and 'this wide'. There are moments when the human body can overcome things you would never expect. You have different sorts of people in life, so why should it be any different in football?

Andres Iniesta is married to Anna Ortiz. The couple began dating in 2008 and exchanged vows on 8 July 2012.

This couple has two daughters, Valeria and Siena, and a son, Paolo Andrea.

Moreover, They lost an unborn child, son Andrés Jr., due to miscarriage in March 2014.

Who is Andres Iniesta?

Andres Iniesta is a professional footballer from Spain who plays as a central midfielder for Japanese club Vissel Kobe.

He served as the captain for three seasons at Barcelona and spent most of his career at Barcelona.

A popular Footballer was born on 11 May 1984 as Andrés Iniesta Luján in Fuentealbilla, Spain. He belongs to Spanish ethnicity.

His father is José Antonio Iniesta and his mother is María Luján. He has a sister named Maribel Iniesta. Furthermore, The family was from Fuentealbilla, a small village in the province of Albacete, Castile–La Mancha, Spain.

He was fond of playing football from an early age.

He attended school in Fuentealbilla. The other detail information about his education is not available.

Andres Iniesta started his career in Barcelona. Moreover, Iniesta featured in 37 out of 38 league games—more than any other player—although 25 of these were substitute appearances in the 2004–05 season and scored twice as Barcelona won La Liga.

Iniesta’s profile continues to rise and he earned plaudits for his willingness to play in any position for his team. He lifted the Joan Gamper Trophy as the captain of the team after a 4–0 victory over the German side Bayern Munich in the pre-season.

As well as, Iniesta was elected the fourth-choice captain behind, in order of preference, Carles Puyol, Xavi, and Víctor Valdés; all four were products of the Barcelona youth system at the start of the season in  2008–09.

Furthermore, During the second leg of the Champions League semi-final against Chelsea, he scored a vital equalizer in the final minute of stoppage time, with a curling strike securing the tie on away goals as the match finished in 1-1.

In the 2009 Champions League final, he missed pre-season fitness training due to the thigh tear suffered. In December 2013, Iniesta signed a new contract with Barcelona, keeping him at the club until 2018.

Japanese club Vissel Kobe announced the signing of Iniesta on a three-year deal on 24 May 2018. Finally, on 22 July, he made his debut, coming on as a second-half substitute for Kazuma Watanabe in a 0–3 defeat against Shonan Bellmare

He has won the international trophy with Spain such as FIFA World Cup in 2010, UEFA European Championship in 2008, and in 2012.

In 2011, Barcelona legend Andres Iniesta has revealed Manchester United players were angry with the Catalan giants and also opened up about their controversial win over Chelsea two years previously.

Andres Iniesta: Salary and Net Worth

He earns $30 million per annum from his profession. His estimated net worth is about $90 million.

Andres Iniesta has a fit and fine body with black and short hair and with blue eyes. Besides, he is 5 feet 7 inches tall with a body mass of 68 kg.