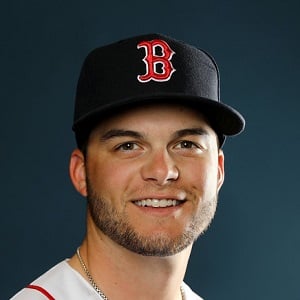 That's the beautiful thing about baseball. You can be any size and be successful

You're going to struggle. You're going to do well. You can't really let the past or the day before - whether you had a good day or bad day - dictate the day you have that certain day

I wouldn't describe myself as a home run hitter. I'm just trying to hit the ball hard in the gaps. Just backspinning baseballs and hitting line drives.

Andrew Benintendi is presently in a relationship. As per the sources, he is dating a girl named Becca Schamel.

Who is Andrew Benintendi?

Additionally, he previously played college baseball for the Arkansas Razorbacks. He was selected in the first round of the 2015 Major League Baseball draft by the Red Sox.

Benintendi was born as Andrew Sebastian Benintendi in Cincinnati, Ohio on July 6, 1994. He was born to parents Chris and Jill Benintendi. Additionally, he developed a keen interest in the world of baseball since his childhood years.

He is of American nationality. Furthermore, he belongs to the mixed ethnic background of Italian and German. He has a sister, Olivia Benintendi.

Andrew Benintendi batted 564 with 12 home runs, 57 runs batted in (RBIs), and 38 stolen bases as a senior. He finished his high school career with an Ohio-record 199 career runs scored. Although he was drafted by the Cincinnati Reds in the 31st round of the 2013 Major League Baseball draft, he did not sign.

Benintendi has a salary of $620,500. Additionally, he has an estimated net worth of around $3 million at present.

There are several rumors which suggest that Benintendi might have recently engaged with his long-time girlfriend. In April 2018, he became part of a controversial sixth inning ruling after umpires ruled him out after he hit a dribbler down the first base side.

Talking about his body measurement, Andrew Benintendi has a height of 5 ft 10 inches. Additionally, he weighs around 77 kg. Furthermore, his hair color and eye color is dark brown.

Benintendi is active over social media. He has a huge number of followers on social networking sites, Instagram and Twitter. He has more than 128.6k followers on Twitter.

In addition, he has over 260k followers on Instagram.