Andrew Cuomo is the 56th governor of New York. Andrew was previously married to Kerry Kennedy from 1990 and divorced in 2005.

Previously, he was married to Kerry Kennedy. Kerry is the seventh child of Robert F. Kennedy and Ethel Skakel Kennedy. The couple exchanged wedding vows on June 9, 1990. From their marriage, they have three daughters: twins, Cara Ethel Kennedy-Cuomo, and Mariah Matilda Kennedy-Cuomo who were born in 1995, and Michaela Andrea Kennedy-Cuomo who was born in 1997. The couple separated in 2003 and got officially divorced in 2005. The reason for the divorce was apparently because Andrew could not give time for his family as he was too busy with his work and Kerry was burdened with all the responsibilities. 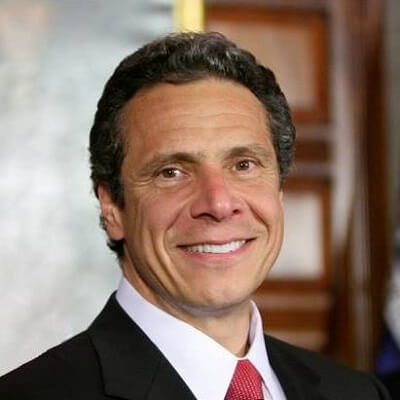 This is not time for politics, and it is no time to fight. I put my hand out in total partnership and cooperation with the president. If he wants a fight he's not going to get it from me. Period

When somebody's the president of the United States, the authority is total, and that's the way it's got to be.

Our Founding Fathers understood and we have to remember today that the balance today between the state and the federal, the magnificent balance that is articulated in the Constitution, is the essence of our democracy.

We don't have a king in this country, we didn't want a king. So we have a constitution and we elect a president.

Who is Andrew Cuomo?

Andrew Cuomo was born as Andrew Mark Cuomo on December 6, 1957, in Queens, New York City, New York, USA. As of 2020, his age is 62. He was born to parents Mario Cuomo(father) and Matilda Cuomo(mother). His father was a politician and served as the 52nd Governor of New York from 1983 to 1994. His mother is an advocate for women and children and an inductee of the National Women’s Hall of Fame.

He has four siblings; Chris, Maria, Margaret, and Madeline. Maria is an award-winning film producer known for ‘Newtown’ and ‘The Invisible War. His youngest brother, Chris is a TV journalist and a newscaster. Margaret is a physician specializing in radiology.

He spent his childhood days in Queens with his family. His family had Kessler’s Grocery Store in South Jamaica, Queens. His ethnicity is Italian, Sicilian.

Talking about his education, he attended New York City P.S. 50 and St. John’s Preparatory School. He was interested in baseball during those days and signed as an outfielder for St. John’s University in 1952. However, after a nasty head injury, he decided to stop playing.

In 1979, he earned his graduation from Fordham University in the Bronx. In 1982, he graduated with a degree in law from Albany Law School.

Andrew Cuomo has an estimated net worth of around $6 million as of 2022. His main source of income is his position as the governor of New York.

Andrew revealed that he earned a million dollars in 2004 and 2005 as a real estate adviser. About seven years ago, his net worth was in the region of $1.75 million to $3 million.

As the New York governor, he receives an annual salary of around $200k making him the second-highest-paid governor in the US only behind California governor Gavin Newsom who earns around $201k per year.

After the 1996 election, Bill Clinton appointed Andrew Cuomo to serve as the secretary of HUD. He transformed HUD from inefficient bureaucracy to an effective driver of housing opportunities and economic development.

In 2006, he was elected New York State Attorney General. His agenda was to fight for social, racial, and economic justice. He worked to fight discrimination in rental apartments, took on the big banks that were squandering billions of dollars in bail-out money, and challenged corporate abuse of the middle class.

On May 22, 2010, Cuomo announced his run for the position of the governor of New York in a video posted to his campaign website. Four days later, he announced his choice for lieutenant governor, the Mayor of Rochester, Robert Duffy. His popularity was so high that he won the election easily receiving 62.6% of the vote.

In November 2018, he was re-elected for the third time with the largest number of votes of any governor in both the primary and the general elections. In his third term, he has been continuing his fight for justice and his work is appreciated by the public. He still remains very popular with the public.

Under his leadership, the state passed marriage equality, a minimum wage of $15, the strongest paid family leave program in America, equal rights for women, the strongest gun safety laws in the nation, and greater protections for immigrants.

In addition to this, the state had the largest investment in education in its history during his tenure and he also cut taxes for the middle class, implemented a 2 percent property tax cap, and the employment rate also became higher than ever. New York became the first state in the US to offer free college tuition for middle-class families.

In 2014, he released his autobiography, ‘All Things Possible: Setbacks and Success in Politics and Life’.

On his first day in office, he renewed an executive order which prohibited Governors of the state from receiving donations from gubernatorial appointees. However, according to an investigation by the NY Times in February 2018, the governor’s administration had reinterpreted the order. He had collected around $890k from 24 of his appointees. Moreover, they also collected around $1.3 million from the partners, children, and businesses of appointees.

In March 2018, The NY Times also reported that he had rewritten the disclaimer language on his campaign website. It added two caveats whereby some gubernatorial appointees are allowed to donate to the governor. The campaign returned $2.5k from one appointee who was in violation of the new disclaimer but it still retains around $890k raised from other appointees.

This was a controversial subject in 2018.

Praise for the response to COVID-19

In 2020, the Coronavirus pandemic hit New York badly. The number of patients skyrocketed in the opening weeks of March and the state had more than 25k cases by March 24.

For acquiring more resources for the state, he publicly feuded with President Trump and requested 30,000 ventilators for hospitals. His request was heeded and the corps transformed the Jacob K. Javits Center into a makeshift hospital by the end of March. In mid-April, he issued an order for the New Yorkers to wear face masks in public places where social distancing was impossible.

He also announced the lockdown of the state and a shutdown of non-essential businesses. His decisions were praised by people all over the country and his popularity also increased significantly.

Andrew stands at a height of around 5 feet 11 inches. He weighs around 90 kg. His hair color is salt and pepper and his eyes are brown in color.

You may also like to read the Bio, Career, Net Worth, Social Media, Relationships, and more about Jay Inslee, Deval Patrick, Rudy Guiliani, etc.