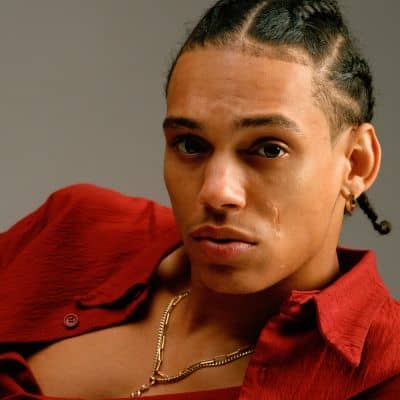 Who is Andrew Darnell Dating?

Currently, Andrew Darnell is rumored to be dating the Like a Virgin singer, who is forty years elder than him. She is a Grammy Award-winning pop star, Madonna.

The rumored lovebirds had their heads pressed together in a seductive stare while getting super cozy in each other’s arms. After the steamy romance-filled evening, the alleged pair met up with jeweler Greg Yuna for a late-night feast at Manhattan eatery Mister French.

On August 18, 2022, he shared a photo in which, Madonna was seen licking Andrew’s nipple while staring into the camera, as someone else kept her hair away from her face.

Looking at their social media posts and other activities, we can conclude that, Andrew Darnell is dating Madonna.

There is info on his past relationships and affairs.

Who is Andrew Darnell?

Andrew Darnell is an American IMG model and actor who has played the role of Sylvester in, Betty, the HBO teen drama.

He is soaring to fame after, he was spotted along with singer-songwriter Madonna, at the Nigerian musician REMA’s concert at New York City’s Irving Plaza. Darnell had his arm wrapped around the singer as they snapped a selfie while celebrating the Friday night event.

Madonna and emerging model and actor Andrew Darnell were spotted ‘snuggling and cuddling’ at the Nigerian musician REMA’s concert at New York City’s Irving Plaza. Darnell had his arm wrapped around the singer as they snapped a selfie while celebrating the Friday night event.

The rumored lovebirds had their heads pressed together in a seductive stare while getting super cozy in each other’s arms. After the steamy romance-filled evening, the alleged pair met up with jeweler Greg Yuna for a late-night feast at Manhattan eatery Mister French.
Briefing about their party night, they drank rosé and noshed on truffle fries. They also ordered crispy rice, and several different kinds of pasta including truffle gnocchi while they enjoyed dancing, and taking selfies at the table all night.  More to the romance speculations, Madonna and Andrew were seen locking lips during dinner while smooching in between. Their openly affectionate snuggling and cuddling in the booth on August 29, 2022, was something really spicy.

The emerging model was born in the United States of America in 1999. Currently, he resides on Long Island, New York.

Further details of his parents, siblings, and educational life are yet to be disclosed.

Andrew is an emerging model and actor. In 2020 he made his acting debut by portraying the role of Sylvester in the teen drama, ‘Betty.’

So, he is on the way to accumulating a more successful career in the future. However, he is stealing the headline, after being rumored as the boyfriend of an American singer-songwriter.

Madonna started her professional singing career in 1982. Previously, she worked as a waitress in some restaurant chains in New York City. She released her first single named “Everybody” after signing the deal with the record company, “sire” in 1982.

The same year, she released another single named “Burning Up”. These two songs fueled her entry into the music industry. Afterward, in 1983, she released her first self-titled album. Following the success of her first album, she went on to release other albums like, “Like A Virgin” in 1984, and “True Blue” in 1986.

She is the founder of an entertainment company, Maverick in 1992. She also designed her clothing line, wrote children’s books, and opened health clubs, and filmmaking. She is involved in various charities and founded the non-profit organization, Raising Malawi in 2006.

She has sold more than 300 million records worldwide. Hence, she is recognized as the best-selling female recording artist of all time by Guinness World Records. In 2010, she collaborated with Justin Timberlake for the song, 4 minutes.

Additionally, she is also an actress. Some of her on-screen projects are “Shanghai Surprise”, “Evita”, “Girl 6”, and others.

Andrew is a young 23-year-old rising star, whose net worth and salary are not available. Nonetheless, he might be making a good amount of money as an IMG model and actor.

On the other hand his rumored girlfriend Madonna’s net worth is estimated to be about,  $850 million, according to Forbes as of 2022.

The 23-year-old, IMG model, Andrew stands at a good height and weight.

Moreover, he has a charming personality. Likewise, Darnell has a brown complexion along with a pair of black eyes and hair of the same color.

Talking about his social media presence, he is pretty active on it. Andrew Darnell has an Instagram under the username, @almightywulf  and has more than 7.5K followers.

On August 18, 2022, he shared a seductive photo with Madonna in which she was seen licking his chest.

Is Madonna dating a Much Younger New Toyboy Andrew Darnell, 23?