Who is Andrew De Leon dating?

Andrew De Leon is a married man. He married his wife Ariel Sky in 2015 after dating her for four years as a girlfriend. The two are blessed with a son and make a complete good match for each other. 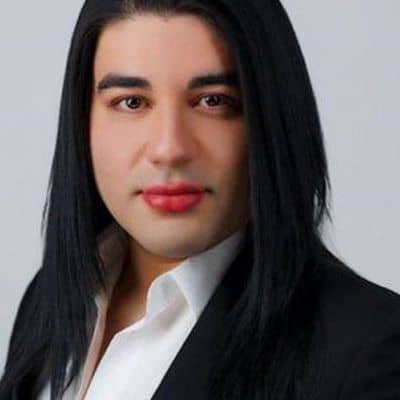 Who is Andrew De Leon?

Andrew De Leon is an opera and gothic singer who got immense fame from Season 7 of America’s Got Talent. Leon has sung popular songs like Vampiro, Bleeding Heart, O Holy Night, and I Need You Here.

Briefly, he was eliminated in the Vegas Round, but he returned for the Wild Card Show. He was later eliminated again in the Semifinals and since then he is famous for his operatic goth genre.

Andrew De Leon was born on 31st August 1992 under the birth sign Virgo. The 31-year-old singer has Caucasian ethnicity and American nationality.

Leon has not revealed information about his parents, education, and siblings to the media yet. Growing up, he felt alone because his interests were different and music help him overcome the sadness he held. He enjoyed listening to Marilyn Manson and Rob Zombie.

Leon’s career rose to new heights when he decided to audition for America’s Got Talent. He sang O Mio Babbino Caro in Episode 7o8 where he received Yes by judges Howard Stern, Sharon Osbourne, and Howie Mandel and was selected for the next round.

Leon was sorted in the category of Opera Singers and the judges were truly impressed as well. In episode 711 his opera piece which he couldn’t give a smooth go. As a result, he was out from AGT in ep 712.

Moreover, Leon became the Wild card for the season as suggested by Howie Mandel and performed a Spanish operatic version of Unbreak My Heart in episode 724.

Leon was ahead of Horse and Jake Wesley Rogers, leading him to the semifinals on behalf of the votes. Likewise, his race ended in Episode 727 after singing Ave Maria’s song as he lack enough votes to be sent to the Finals.

The estimated net worth of the singer Leon is $ 2 Million as of 2022. Further, Leon earns a salary of thousand dollars maybe even a million which is not transparent.

To date, there are no reported rumors and controversies relating to the singer Andrew De Leon.

Leon stands 5 feet and 10 inches tall and weighs around 80 kg. He has black hair, black eyes, and a fair body complexion over which he loves to put makeup. Often, Leon carries under-eye makeup and matches the vibe with the overall. It is rare that you see him without makeup.

Leon has a youTube channel named Andy Gnosis with 38.2k followers where he uploads his songs. He keeps his stage name Andy Gnosis and has Facebook with the same name and around 4k followers. He is also using Twitter, TikTok, and Instagram.