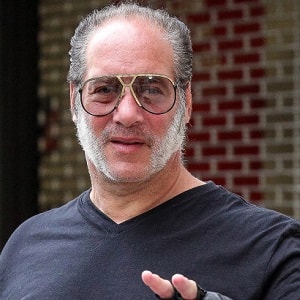 “I'm not the greatest husband - I've got a girlfriend. It doesn't really please my wife, but then if I was looking to please her I wouldn't have a girlfriend. I mean she knows about it, and I guess she's okay with it. Plus my kids like both of them.”

What is the relationship of Andrew Dice Clay?

Andrew Dice Clay has been married three times. He married Kathy Swanson in 1984 but he divorced her in 1986.

He filed a $6 million breach of contract suit by her ex-wife and accused Clay of deceptively persuading her to use their mutual attorney for their divorce proceedings, but he denied it.

He married waitress Kathleen “Trini” Monica in 1992 but they also got divorced in 2002. They have welcomed two sons, Maxwell Lee and Dillon Scott.

Who is Andrew Dice Clay?

Andrew Dice Clay is an American stand-up comedian, musician, actor, and producer. He became famous with a brash, macho, offensive personal known as ‘The Diceman’ in the late 1980s.

He was born on September 29, 1957, in Brooklyn, New York City, USA. He was given the birth name as Andrew Clay Silverstein.

His father was a real estate agent and a boxer. He belongs to a Jewish family. He has a sister. Andrew used to entertain his family with impressions at the age of five.

He started playing drums and was inspired by the sounds of big band music. He holds American citizenship and his ethnicity is Ashkenazi Jewish.

He attended James Madison High School, Brooklyn. He then pursued higher education but dropped out to become a full-time comedian.

He debuted his stand-up career when he gave his audition at Pips comedy club in Sheepshead Bay in 1978.

He played the character of ‘The Diceman’ based on Jerry Lewis as Buddy Love from The Nutty Professor which transformed into John Travolta in Grease. Andrew made his acting more powerful and portrayed in The Improv, Catch a Rising Star, and Dangerfield’s.

He relocated to L.A in 1980 and worked at Comedy Store where he changed his stage name to Andrew Clay. He landed his first film role in ‘Wacko’ in 1982. His first sitcom roles were on ‘M*A*S*H’ and ‘Different Strokes’.

Andrew made his breakthrough in 1998 after he performed at an all-male Big Brother Association dinner event. The show became a hit and 20th Century Fox offered him a film deal the next day. Andrew came with the comedy album ‘Dice’ in March 1989.

He became the first comedian to sell out two consecutive nights at Madison Square Garden in New York City in 1990 where 38,000 people were present.

He met his agent Dennis Arfa at Dangerfield’s, and started his role in the 1990 film ‘The Adventures of Ford Fairlane’ and he received Raspberry Award for Worst Actor for his performance.

He was awarded Razzie Award in the category Worst Award for ‘The Adventures of Ford Fairlane’ in 1991 and nominated for that award for ‘Dice Rules’ in 1992.

Andrew had been nominated for Screen Actors Guild Awards in the category ‘Outstanding Performance by a Cast in a Motion Picture’ for ‘A Star Is Born’ in 2019.

He was also nominated for Gold Derby Awards in the category Ensemble Cast for ‘Blue Jasmine’ in 2014.

He has an estimated net income of around $10 million as of 2022, and his main source of income is his professional career.

His salary and income are under review.

He was banned a lifetime from appearing on the network after he performed at the 1989 MTV Video Music Awards, where he included his adult versions of the Mother Goose nursery rhymes.

He was the first celebrity to be fired after he entertained the idea of quitting while in Donald Trump’s presence and called him Trump ‘Donny Trump’ in ‘The Celebrity Apprentice 2’.

He has a height of 5 ft. 11 inches. He has black and white hair and light brown eyes.

Other information regarding his dress size, shoe size, etc. is not available.