Andrew East is an American football player. Andrew is married to his longtime girlfriend, Shawn Johnson since 2016 is a father of one. 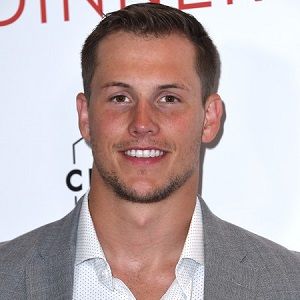 Andrew East is a married man. He tied the knot with his girlfriend Shawn Johnson after being in a relationship for several years. Shawn Johnson is an Olympic gold medalist.

Then in late 2019, this couple welcomed their first child. They named her Drew Hazel East.

Who is Andrew East?

Andrew East is an American football player who plays like a long snapper. He is also the husband of Olympic gold medalist Shawn Johnson.

Andrew east was born on September 17, 1991, in Indianapolis, Indiana, United States. His father, Guy East was also a long snapper at Purdue.

His mother’s name is Masha East and his siblings’ names are Guy Jr. East, Grant East, Christine East, and James East. His nationality is American and his ethnicity is Caucasian.

Concerning his education, Andrew attended the Owen Graduate School of Management. Later, he played his college football at Vanderbilt University.

Andrew East began his football career from his school days. He has played his college football at Vanderbilt University. In May 2015, he signed with Kansas City Chiefs. However, he was released on August 31, 2015, from the team. Later in 2016, Andrew signed a future free-agent contract with the Seattle Seahawks.

However, he couldn’t make it a big one and again released after a couple of months. Moreover, the Los Angeles Rams signed him on March 13, 2017. After several months he was waived by the team on May 3, 2017. Recently, he was released by Oakland Raiders on September 2, 2017, after signing him on July 28, 2017.

So far, he has not won any awards in his career. Although, he has been doing his work in the best possible way. In the near future, he will definitely grab some awards.

Being a professional football player, Andrew earns a healthy amount of money from his profession. His net worth is around $10 million and his salary is $525,000 from his club.

As of now, there are not any drastic rumors regarding his personal and professional life. Furthermore, he has never faced any controversy to date. It seems the football player has more focus on his career rather than stuck in any controversy.

Moving towards his body measurements, Andrew East has a towering height of 6 ft 2 inches and weighs 109 kg. Moreover, he has brown eyes and light brown hair.