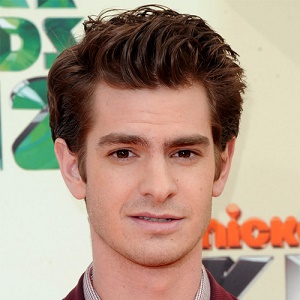 I've realised that at the top of the mountain, there's another mountain

One of the amazing things about Spider-Man is that you don’t see skin colour when he’s in the suit. You don’t see any religious beliefs. A hero is a hero, whether you’re a man, woman, gay, lesbian, straight, black, white or red all over ― it doesn’t matter.

Although, Garfield hooked up with his co-star Emma Stone during the production of the film The Amazing Spider-Man. They began dating in 2011. After the long years’ relationship, they broke up in 2015.

Who is Andrew Garfield?

Andrew Garfield is a British-American actor. Garfield is best known for his role in “The Social Network (2010)” as Eduardo Saverin.

The Amazing Spiderman pushes him into the limelight where he starred as the lead role of Peter Parker.

He was born to Richard Garfield and Lynn on 20 August 1983 in Los Angeles, California, United States. His full name is Andrew Russell Garfield.

Garfield’s parents started an interior design business. Moreover, his father was the head coach of Guildford Swimming and his mom is an assistant nursery teacher.

He has a mixed ethnicity of Jewish-English and holds dual citizenship of America and the United Kingdom. Garfield’s elder brother, Ben is a doctor.

He joined Priory Preparatory School in Banstead for his education. He was graduated from the Central School of Speech and Drama, the University of London in 2004.

Later he enrolled at City of London Freemen’s School in Ashtead.

He has played in 2010 Blockbuster The Social Network alongside Jesse Eisenberg in which he got tons of nominations for the Best Supporting Role.

Andrew has won many awards for his various roles. Firstly, in 2007 he gained the Best Actor in the “British Academy Television Awards”. He has also earned the awards in “Satellite Awards”, “Saturn Awards”.

He has also named the best actor at the British Academy Television Awards in 2007. Garfield was awarded as the British Actor of the year in 2016 for the movie Hacksaw Ridge.

He has also got numerous amounts of nominations. Recently he was nominated for Academy Awards and British Academy Film Awards as the best actor in 2017 for Hacksaw Ridge.

This actress’s net worth is estimated at around $14 million. His 2017’s movie Breathe has earned around $4.9 million at the box office.

Garfield was a huge controversy when he commented on his gay character in the movie Angels in America. Social media exploded when he said that “I am a gay man right now just without the physical act.”

He was also seen sharing an intimate moment with actor Dev Patel.

Andrew Garfield has a height of 5 ft 10 inches and weighs 74 kg.

He has light brown hair color and dark brown eyes.

The Hollywood duo Emma Stone and Andrew Garfield are back together: How true are the rumors?