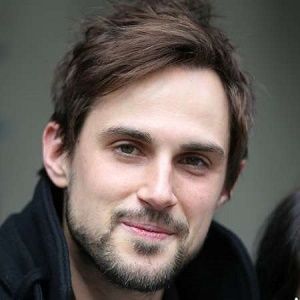 You and the character just become the same person in a way. There isn't really a character

it's just you creating this illusion.

I have had the opportunity to work with Andy Lincoln a lot. He's got a remarkable process. He just has these ways of sinking into the scene and into a character that is very physical. He'll make these sounds and these grunts and these moans... I don't know what it is that he's channeling! It lets you know it's okay for you to do that, too.

Our impulse as people is to try to control

as an actor, you have to give up that control.

Andrew J. West started dating actress Amber Stevens after meeting on the television show Greek. They tied a knot on 5th December 2014 in Los Angeles after dating for several years.

The couple has been blessed with a daughter named Ava Laverne born on October 7, 2018.

The couple has been living a happy life together along with his child with no rumors of divorce or an extra-marital affair.

Who is Andrew J. West?

Andrew J. West is a famous American actor popular for his role as Fisher in the ABC Family comedy-drama named Greek and in the AMC horror-drama named The Walking Dead as Gareth.

His birth name is Andrew James West and was born on 22nd November 1983 in Merrillville, Indiana. He has not revealed much information regarding his family members and ancestry.

Besides, he grew up in the nearby town of Lake Station. From an early age, he was keenly interested in acting.

Discussing his educational background, he studied anthropology and philosophy, and later he was interested in acting. After completing his high school, he joined the local production of SubUrbia along with his friends.

Further, it made a turning point in Andrew’s life, providing him the confidence to decide to pursue a career in acting.

On talking about his career, Andrew J. West started producing, writing, and acting in short films along with his college friends, some of which headed to the festivals and earned awards.

Moreover, Andrew’s talent landed him as the manager after moving to LA with some of those same close friends. In addition, Andrew initiated to garner attention from producers and casting directors alike after he appeared in the cult classic FX show “Nip/Tuck” as “Christian Troy”.

Additionally, he made guest appearances on “Suburgatory” and “Shit My Dad Says“. This comedy shows drove him to score the lead roles in two network pilots: “Family Practice” opposite Christopher Lloyd and Jean Smart; and ABC’s “Who Gets The Parents“, opposite Jane Kaczmarek and Adam Arkin.

Furthermore, currently, Andrew is busy in the indie feature film “The Middle Man” with the lead role opposite Jim O’Heir. He also guest-starred in NBC’s “Under the Dome” role in the Tom Kapinos/Warner Brothers pilot “Dead People”.

Discussing his lifetime achievements and awards, he earned a Saturn Award for Best Guest Starring Role on Television nomination cause of his performance.

Thus, at a moment there are no records oh his rumors or controversy.

Andrew J. West: Salary and the Net worth

He is supposed to earn a high amount of salary but currently has not revealed to the media. However, he has an estimated net worth of US $3 Million.

Andrew J. West has a height of 5 feet 11 inches. His weight is currently unknown. Further, he has grey eyes and brown hair color.