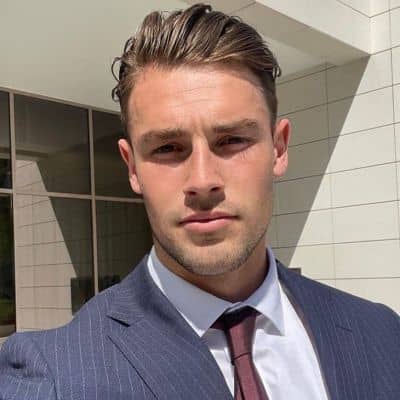 The Love Island 2022 contestants Tasha Ghouri and Andrew Le Page have moved in together in East London. The love birds have found their love after appearing on this year’s ITV2 series and also finished fourth.

The real estate agent is willing to see if he is ready to see the future with Tasha, so he moved in with her just two months after the end of the series. He also announced the same, with a close-up snap of the box of stuffed animals and throws at Tasha’s old apartment continuing,

Did The Couple Ink Each Other With Matching Tattoos?

Andrew Le Page and Tasha Ghouri are hitched with a permanent mark on their romance. The couple opted for matching rose tattoos parlor The London Social dated 28 August 2022.

Tasha Ghouri has craved a dainty flower tattoo just below her ear and a cochlear implant on the side of her neck.

Unlike Tasha, 27-year-old estate agent Andrew had his rose in his hand. The couple revealed their new relationship milestone by sharing pictures of their new body art on Instagram.

Who is Andrew Le Page?

He is best known for being the finalist of the reality show, Love Island UK, season 8, along with his partner, Tasha Ghouri.

The Love Island 2022 contestant Andrew Le Page, announced that he will return back to his real estate agent work by quitting social media fame.

The handsome star was born on May 1, 1995, in Guernsey. Similarly, he holds British nationality while he belongs to the English ethnicity.

According to the astrological chart, his birth sign is Taurus.

He was born to his father, Jamie, and mother, Karen. They got married in 1987. Other details about his family, and siblings are currently unavailable. He prefers to keep his personal life away from the media reach.

Moving on to his educational life, he completed his schooling at a private school in his hometown.

Later, he studied at Savoy International and Elizabeth College.

Soon after graduation, he started his career as a real estate agent.

In 2022, he gained immense fame and recognition, after appearing as a contestant in the popular TV reality show, ”Love Island UK” season 8.

At the beginning of the show, he was seen pairing up and having a romance with Coco Lodge. Although, he partnered up with Tasha Ghouri, and ended the show in the 4th position along with her.

However, Ekin-Su Culculoglu and Davide Sanclimenti were the winners of the show. Meanwhile, the runners-up were Luca Bish and Gemma Owen.

During his long 58days appearance in the show, he was able to win only one challenge named, Wish you were beer.  Love Island is a dating couple show, which airs on ITV2. The 8th season of the show ran from 6 June to 1 August 2022.

Love Island’s Andrew has an estimated net worth of around $3.4 Million USD as of 2022.

Primarily, he earns as a real estate agent tv star, and through commercials, brand promotions, and business ventures.

Being a hard-working and talented star, it is apparent that, his net worth will increase in the upcoming years.

Love Island couple Tasha Ghouri and Andrew Le Page have officially moved in together in East London. The news of their togetherness and what the couple is doing, has been the topic of interest for their fans.

Recently in November 2022, Andrew shared that, he intends to return to his day job after leaving the villa this summer.

His facial appearance consists of brown hair and eyes with a fair skin tone.

On the other hand, he is also active on Tiktok. As of November 9, 2022, has posted around 24 Tiktok videos. Mostly, he is seen sharing the Tiktok video with his girlfriend, Tasha Ghouri.

Love Island’s Tasha and Andrew Le Page move in together in East London!

The Truth behind the Matching Tattoos of Love Island’s Tasha Ghouri and Andrew Le Page!