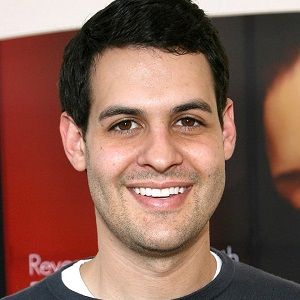 What is the relationship of Andrew Leeds?

Andrew Leeds is not a married man. His sexuality is straight as there is no news about him being gay. Recently, he is dating Lindsey Kraft who is an American actress. She is best recognized as Allison on the Netflix show Grace & Frankie. They were dating each other. But they haven’t disclosed how they met each other. They seem happy and are enjoying each other’s company.

On 31st March 2014, Lindsey uploaded their photo together. Many people thought that they were married and he was her husband. But she cleared their doubts by saying that she loved how everyone thought him as her husband.

Who is Andrew Leeds?

Andrew Leeds is an American actor and writer. He is famous for the role of Josh on Cristela. Similarly, he is known for the role of Christopher Pelant on Bones and Jackson Pulver on Veep.

Andrew Leeds was born on 24th September 1981 in Clearwater, Florida, United States. He is the son of Robert Gary Leeds and Kathy Lynn Rodriguez. There is no information about his siblings. His nationality is American whereas his ethnicity is Ashkenazi Jewish.

Talking about his education, he attended Stanford University. He participated in theatrical productions on campus like acting, directing, set designing, producing. He graduated from there with a degree in computer science.

Likewise, he and his writing partner David Lampson were selected to be on the Bravo reality show Situation: Comedy. He and his partner’s pilot, Stephen’s Life, was selected out of 10,000 submissions. Later, he worked on shows like Veep and It’s Always Sunny in Philadelphia. In the year 2011, his drama pilot Rex is Not Your Lawyer was produced by NBC.

Similarly, he and his partner wrote television pilot for Brenda Forever. After that, he worked in a regular role as Josh in the ABC comedy Cristela. Later he wrote comedy pilot for Those people and appeared on Workaholics. Furthermore, he became the member of the Main Company of the sketch comedy/improv troupe The Groundlings.

The actor has not been associated with any awards yet.

The successful actor Andrew Leeds might earn a huge amount of money from his career but he has kept his salary, incomes, and earnings private.

As he is private about his life and focuses on his career. Due to which he has not been into rumors and controversy.

Talking about the body measurements of Andrew Leeds he has a decent height and great physique. There is no information about his height and weight. He has black hair, brown eyes, and fair skin tone.