Andrew Lincoln is married and a father of one.

Andrew Lincoln began dating actress Tara Fitzgerald in 1997. The pair separated a year later. Additionally, he also dated actress Danai Gurira for a brief amount of time. At present, he is a married man.

He is married to actress Gael Anderson. The couple married on 10 June 2006. They have two children – a daughter Matilda Clutterbuck and a son Arthur Clutterbuck. 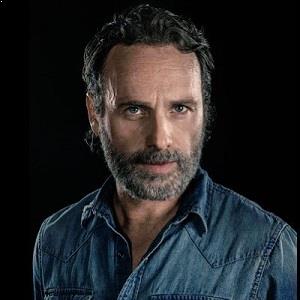 I think my wife has always been aware, whatever country we have been in, of my dramatic leading man status, a little too dramatic she would probably say.

I don't really have any regrets because if I choose not to do something there is usually a very good reason. Once I've made the decision I don't view it as a missed opportunity, just a different path.

When you are an actor every day kind of morphs into one as there is no set structure to my job.

When I was at drama school I wanted to do classical theatre. It just so happened that I did a film when I came out and I moved that way.

The whole vanity aspect of building up different muscles - I have no interest.

Who is Andrew Lincoln?

Andrew Lincoln is an English actor. People mostly recognize him for his portrayal of the lead character, Rick Grimes in AMC’s hit television series ‘The Walking Dead’.

Additionally, he also appeared in the Christmas-themed romantic comedy film ‘Love Actually’ in 2003.

Lincoln was born in London on September 14, 1973. His father is a civil engineer and his mother is a South African nurse. Throughout most of his childhood years, he grew up in Hull and Bath, Somerset.

Additionally, he became interested in the world of acting in his childhood years.  He is of British nationality. Furthermore, he belongs to an English ethnic background. He has an older brother Richard Clutterbuck who is a teacher.

Andrew Lincoln initially made his screen debut in 1994’s Drop the Dead Donkey episode. Later, he had his first major role in the BBC drama ‘This Life’.

In 2001, he portrayed the role of Julian Latimer in ‘State of Mind’. In addition, he appeared as Simon Casey in the TV series ‘Teachers’.

Since then, he has appeared in numerous other movies and television series. All in all, he has over 40 credits as an actor.

Some other movies and television series that Lincoln has appeared in are ‘Fear the Walking Dead’, ‘Robot Chicken’, ‘Red Nose Day Actually’, ‘Made in Dagenham’, ‘Strike Back’, ‘Heartbreaker’, ‘Moonshot’, ‘Wuthering Heights, ‘Million Dollar Traders’, ‘The Things I Haven’t Told You’, ‘Afterlife’, ‘Scenes of a Sexual Nature’, ‘No Waste Like Home’, ‘These Foolish Things’, ‘Whose Baby?’, and ‘Holby City’ among others.

Additionally, he has 1 credit as a director. His most important role came after he was cast as the lead character in AMC’s post-apocalyptic horror comic book television series ‘The Walking Dead’.

Additionally, he has also garnered nominations for the BAFTA TV Award, Saturn Award, Critics’ Choice TV Award, Empire Award, and Chainsaw Award among others. All in all, he has 5 wins and 18 nominations to his name to date.

Lincoln has a salary of $650 Thousand per episode for his appearance in ‘The Walking Dead’. However, he has an estimated net worth of around $16 million at present.

Lincoln’s character Rick’s choice regarding Negan was controversial for several fans of the show in the season 8 finale.

Additionally, he recently came to the news after he decided to leave the show ‘The Walking Dead’.

Talking about his body measurement, Andrew Lincoln has a height of 5 feet 10 inches or 178 cm. Additionally, he weighs around 80 kg.

Lincoln is not active on social media. He does not have his official Twitter and Instagram accounts. However, his fan page on Facebook has more than 1.6M followers.