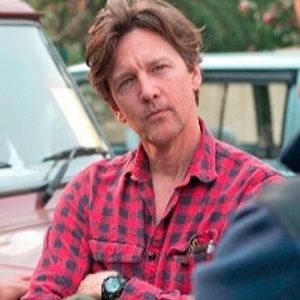 I thought I understood the story very well, because I've lived with it for so long. But movies change and take on a life of their own once they start to be made, and you have to keep your eye on the real ball, not the ball that's in your head.

You always have to keep thinking: "Where am I going?" Whereas acting, you're always thinking: "What am I doing?" You don't want to know where you're going, you want to be right where you are.

Andrew Mccarthy was in 20 years long relationship with his college sweetheart, Carol Schneider. Later he married her in 1999 and they had a son, Sam before separating in 2005.

Later, he was married to Dolores Rice on 28 Aug 2011. They have a daughter, Willow, and a son Rowan. Now, he is happily living with rice and there are no rumors of separation and divorce.

Who is Andrew McCarthy?

Andrew McCarthy is an American actor, Travel Writer, and Television director who is known for films like St. Elmo’s Fire, Pretty in Pink, and Kansas.

Furthermore, he is known for his directorial skill in Emmy Award-winning series, Orange Is the New Black.

Andrew McCarthy was born on November 29, 1962, in Westfield, New Jersey. He hasn’t revealed his parents and ethnicity info.

But his father was involved in investment and stocks while his mother worked for a newspaper.

He was educated through Pingry School and also attended Bernards High School. However, there is no information on his college degree and university attended.

Andrew Mccarthy got his breakthrough role from the classic comedy film ‘Class’ in 1983. He was a member of a group of teen actors called ‘Brat Pack’ in the ’80s. He starred in films like St. Elmo’s Fire, Pretty in Pink with the group.

Later, he featured in a theatrical adaptation Bret Easton Ellis‘ novel, Less Than Zero and Mannequin in 1987.  Later he went on to give many hits including,’Fresh Horses’ and Kansas in 1988,’Weekend at Bernie’s (1989), Main Street(2010), and many others.

Besides films, he has acted in TV series like Law & Order: Criminal Intent, Lipstick Jungle, and Kingdom Hospital among the others. Furthermore, he has directed TV series like Gossip Girl, Blacklist, White Collar, and The Family among others. Later, he became a travel writer and currently is an Editor at Large at National Geographic Traveler magazine.

For award and recognition, he has won the best actor award for the film Mannequin and Best Short Film award for the film News For The Church.  As a travel writer, he has received six Lowell Thomas awards Travel Journalist of the Year by The Society of American Travel Writers.

He has an estimated net worth of $12 million but his salary is not revealed.

Andrew Mccarthy is 5 ft 8 inches tall and weighs around 70 kg. He has attractive blue eyes and has light brown hair. He fits in 10 US size shoes.

Also, read the affair, salary, the net worth, controversy, and the bio of Drena De Niro, Marita Stavrou, and Sophie Von Haselberg.