Andrew Rea is an American chef along with a filmmaker. 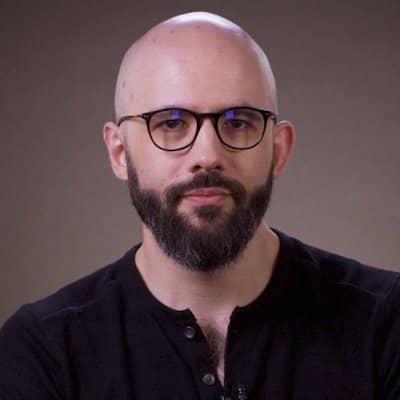 Andrew Rea is engaged to his girlfriend Jessica Opon. She is a producer of his YouTube channel.

Recently this couple took their affair to the next level. They exchanged rings in mid-May 2021. The news was shared by Andrew via his Instagram post.

But he was once married. But to protect his ex-wife’s privacy, he has not disclosed her name. The wedding and divorce details are also hidden from the public.

Who is Andrew Rea?

Andrew Rea is an American chef along with a filmmaker. He also has a YouTube cooking channel under the name Babish Culinary Universe.

Andrew is also a social media star and has thousands of followers on different platforms. He won the 9th Streamy Awards in 2019.

He was born as Andrew Douglas Rea in Mendon, New York, the US on 02 Sep 1987. The name of his mother was Annie and his father’s name is Douglas Rea.

Andrew’s ancestry is a mix of Polish-Italian-Welsh and has an older brother named David.

Talking about his academics, he attended Hofstra University and passed out in 2009. He studied Film Studies there.

Andrew Rea after completing studies worked at SwitchFX Inc as visual effects artist. But he left the job and started to focus on his culinary art. Now he is one of the popular faces in the food industry and has his own shows on YouTube.

His show Binging with Babish highlights those recipes which are shown on TV or in films. In this, he step-by-step prepares the meal. He also has another show titled Basics with Babish hat focuses on basic recipes.

The third show was Stump Sohla. Along with Sohla El-Waylly, he hosted the show and it was aired for only 10 episodes. Moreover, this food artist wrote two cookbooks titled Eat What You Watch: A Cookbook for Movie Lovers (2017) and Binging with Babish: 100 Recipes Recreated from Your Favorite Movies and TV Shows (2019).

He also uses Instagram and has over 1 million followers. On this, he follows around 385 people. His Youtube channel has the highest number of supporters. The channel is named Babish Culinary Universe and it has almost 9 million subscribers.

It mainly contains content related to food, travel, and education. It was created in Aug 2006 and at present has over 1 billion views.

Currently, his estimated net worth of around $1 million. The yearly salary from his YouTube channel is around $157.1K – $2.5M.

This Culinary star is keeping himself away from rumors and is also not surrounded by any desperate scandals.

Regarding Andrew Rea’s body features, his height and his body weight are of average shape.

Moreover, his eyes are dark brown but his hair color is black. He likes to have his head shaved but not the beard.

Andrew Rea Is Engaged To His LongTime Girlfriend Jessica Opon; Who is his Fiance?