Mostly know him as the financial columnist for The New York Times and a co-anchor of CNBC's ‘Squawk Box.’

Andrew Ross Sorkin is a married man. He is married to Pilar Queen Sorkin. The pair married on 9 June 2007. They have three children together, Henry, Robin, and Sydney. 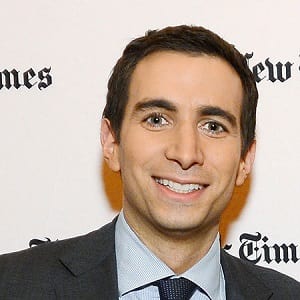 Who is Andrew Ross Sorkin?

Andrew Ross Sorkin is an American journalist and author. People mostly know him as the financial columnist for The New York Times and a co-anchor of CNBC’s ‘Squawk Box.’

Additionally, he is also the founder and editor of ‘DealBook.’

Sorkin was born in New York City, New York on February 19, 1977. He was born to parents Laurence T. Sorkin and Joan Ross Sorkin.

His mother is a playwright and his father worked as a partner at the law firm ‘Cahill Gordon & Reindel.’ Sorkin is of American nationality. Furthermore, there are no details available about his ethnic background at present.

Talking about his education, Sorkin attended Scarsdale High School. Additionally, he received a Bachelor of Science from Cornell University in 1999.

Andrew Ross Sorkin initially joined The New York Times as a student intern. Additionally, he published 71 articles before he graduated from high school. In the summer of 1996, he worked for ‘Businessweek.’ Eventually, Andrew joined ‘The New York Times full-time in 1999.

In addition, he became chief mergers and acquisitions reporter for the paper in 2000. Sorkin broke Chase’s acquisition of JPMorgan Chase and Hewlett-Packard’s acquisition of Compaq. Additionally, he also covered Vodafone’s $183 billion hostile bid for Mannesmann.

Furthermore, Sorkin has also reported on the Wall Street financial crisis. He reported the collapse of Bear Stearns and Lehman Brothers. Additionally, he wrote a series of columns criticizing American corporations in 2014 for trying to lower their US tax bill by the process of merging with smaller foreign companies.

Sorkin is the founder and editor of ‘DealBook’ which is one of the first financial news aggregation services on the Internet. In addition, he acted as the co-anchor on CNBC’s ‘Squawk Box’ in July 2011. He is also the co-creator for the Showtime series ‘Billions.’ He has authored books including ‘Too Big to Fail’ and ‘Too Big to Fail: Inside the Battle to Save Wall Street.’

Sorkin won the Gerald Loeb Award in 2005. Additionally, he also won a Society of American Business Editors and Writers Award.

Sorkin has not revealed his current salary. However, he has an estimated net worth of around $10 million at present.

Several of Sorkin’s articles have been termed controversial over the years. He became part of a controversy after people suggested that he might have appropriated colleagues’ work.

At present, there are no rumors concerning Andrew’s life and career.

Talking about his body measurement, there are no details available about Andrew Ross Sorkin’s weight but his height is 6 ft 3 inches. His hair color is dark brown and his eye color is light brown.

In addition, he has over 2.6k followers on Instagram. Furthermore, his Facebook page has over 70k followers.