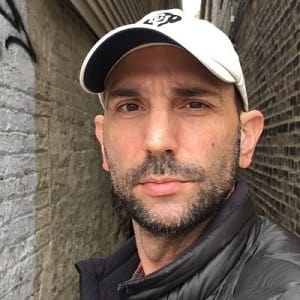 Andrew Rothenberg was previously married to Deborah (Dado) Gyüre. There are no further details available about the marriage. They have two children together.

Who is Andrew Rothenberg?

Andrew Rothenberg is an American actor. People mostly know him for his role as Agent Phil Schlatter on ‘Weeds.’ Additionally, he has appeared in several other movies and television series like ‘True Blood’, ‘The Walking Dead’, and ‘Criminal Minds’ among others.

Rothenberg was born in Los Angeles County, California on January 26, 1969. He developed a keen interest in acting as a child. Andrew is of American nationality. Furthermore, there are no details available about his ethnic background at present.

Talking about his education, no information is available relating to Rothenberg’s educational background.

Rothenberg initially appeared in the TV series ‘Missing Persons’ in 1993 as Glen. Additionally, he played the role of Shirt in another TV series ‘EZ Streets.’ In 1997, Andrew portrayed the role of Homer in the movie ‘Chicago Cab.’ Since then, he has appeared in several other movies and television series. At present, he has more than 55 credits as an actor.

Some other movie and television series that Rothenberg has appeared in are ‘30 Miles from Nowhere’, ‘Dietland’, ‘Chicago Fire’, ‘Madam Secretary’, ‘Electric Dreams’, ‘Midnighters’, ‘Chicago Justice’, ‘The Exorcist’, ‘The Good Wife’, ‘The Mysteries of Laura’, ‘Blue Bloods’, ‘Elementary’, ‘Mob City’, ‘Person of Interest’, ‘The Walking Dead’, ‘American Horror Story’, ‘Hawthorne’, ‘No Ordinary Family’, ‘Supernatural’, ‘Castle’, ‘NCIS: Los Angeles’, ‘Lie to Me’, and ‘NCIS’ among others. Furthermore, Andrew also provided the voice for the video game ‘L.A. Noire.’

Rothenberg has not revealed his current salary. In addition, there are no details available about his estimated net worth.

Rothenberg has not been part of any notable controversies in his career. Additionally, at present, there are no rumors concerning his life and career.

Talking about his body measurement, Rothenberg has a height of 6 feet 2 inches (1.88 m). Additionally, his hair color and eye color is dark brown.