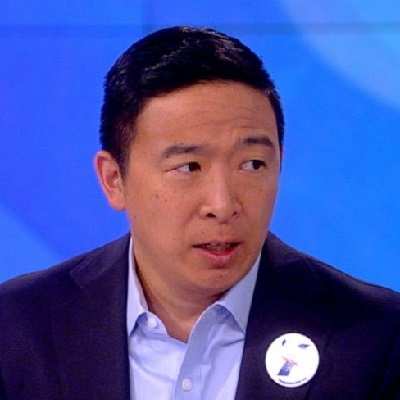 Andrew Yang is a happily married man. His wife, Evelyn Yang is a Marketer. The couple got married to each other in 2011.

Together, the couple has two sons. Their elder son, Christopher is struggling with the autism spectrum.

Who is Andrew Yang?

American Andrew Yang is an entrepreneur and politician. Yang is renowned as the CEO and Founder of Venture For America.

Currently, he is running for the position of NYC Mayor.

Andrew Yang was born on 13th January 1975 in Schenectady, New York, U.S. He is of Far-East-Asian ethnicity with Chinese ancestry.

In the 1960s, his parents got migrated from Taiwan to the United States. His father completed a Doctorate from the International Business Machines Corporation with Honors in Physics. Whereas, her mother used to the system administrator at a local University.

He has an elder brother, Lawrence. Lawrence is a professor of psychology.

Moving to his academics, he completed his High School education at the Phillips Exeter Academy. In the year 1992, he joined Brown University with Honors in Economics. After graduation, he earned his J.D from the Columbia University School of Law.

– 1999- started working for Davis Polk & Wardwell LLP as an associate.

– January 2006- Joined the Manhattan GMAT as the CEO, President, and Managing Director.

– May 2011- Founded the non-profit organization, Venture for America that provides fellowship programs of top college graduates.

– November 2017- Filled for as a candidate for the President of US in 2020. On 11th February 2020, he dropped out from the presidential race and endorsed Joe Biden.

His net worth involves the 2,700 square foot home worth half of a million. Besides that, he has investments in various companies including Google, Lending Club, and Hustle Fund I, LP.

He has made his headlines within the media for writing columns. Last, he wrote a column named, My Vision For New York City’s Jewish Community.

In the column, he mentioned to Push Back against the BDS movement and argued that Singles Out Israel for Economic Punishment. Also, he has compared the BDS Movements to Nazi Boycotts of Jewish businesses.

Prior to that, he faced backlash for writing a column in The Washington Post addressing racism surrounding COVID-19.

He has black eyes with black hair. He stands at a height of 5 feet and 11 inches and has a decent weight.

Besides that, he has a self-titled YouTube channel with 181k subscribers with 22.4 million.