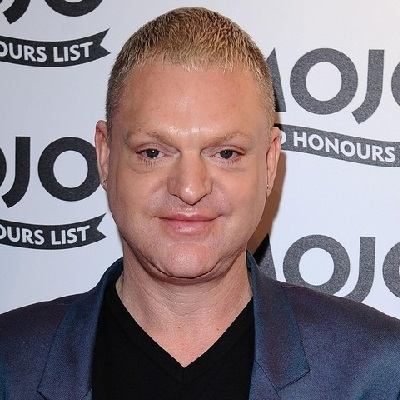 Being HIV-positive does not mean that you have AIDS. My life expectancy should be the same as anyone else's, so there's no need to panic.

Our songs are nonsense. And life is nonsense.

Vince taught this robot to sing "Video killed the Radio Star" and it sounded very lonely.

Andy Bell is married to his boyfriend, Stephen Moss. He exchanged vows with him in January 2013.

Previously, he was in a relationship with Paul M. Hickey. His partner Paul was an author by profession. He passed away on the 11th of April 2012 at the age of 62 years.

Who is Andy Bell?

British Andy Bell is a singer and songwriter. He is popular as the lead singer of the English synthpop duo, Erasure.

Also, he is immensely popular in the LGBT community as an icon.

Andy Bell was born on the 25th of April 1964 in Dogsthorpe, Peterborough. His birth name is Andrew Ivan Bell. He is of British-Scottish ethnicity. As of 2020, he is 56 years old. Also, his zodiac sign is Taurus.

Till date, he has not shared any details on his family background including his father, mother, and siblings. However, he happens to the firstborn to her parents among six children.

Talking about his educational background, he attended King’s School in his hometown. Since childhood, he has developed a sense of passion for the music.

At junior school, he used to sing at the school choir. At the time, he was highly influenced by the music of the bands, Siouxsie and the Banshee, Yazoo, and Blondie.

Initially, Andy Bell started his career as a salesperson. At the time, he was also engaged with the band, Void as a singer. Later, he gave the audition and formed the duet with the singer to Vince Clarke. They named the synth-pop duo, Erasure.

The band’s first three singles became the commercial failures within the UK. However, the third singles, Oh L’amour hit the chart in Australia and France. Subsequently, the band launched its’ fourth single, Sometimes. Through the single, the band got recognition in London.

Furthermore, the duo launched albums like The Innocents, Erasure, Loaveboat, and World Be Gone. Last, in 2020, the duo released the album The Neon, with 10 tracks. The album charted the 4th position in the UK Albums. The duo has released over 200 songs and sold more than 25 albums worldwide.

Apart from the duo, he is equally successful in his solo career as a singer too. In 2005, he launched his debut solo album, Electric Blue under the recording label, Sanctuary Records. The album consists of the 14 tracks that peaked at the 12th position in the U.S Dance/Electronic Albums.

Also, the list of his solo singles includes Running Out, Will You Be There? He released those albums under the pseudonym name, Mimo. Also, the list continues with the singles like Non-Stop, I Don’t Like, Fountain of Youth, and My Precious One.

Andy Bell has blue eyes with auburn hair. He stands at a height of 5 feet 11 inches and weighs around 74 kg.

He is has been in the headlines due to his comments that he made about movie mogul Harvey Weinstein. At the time, he hit out the Hollywood System calling out that similar stories have always been there within the showbiz industry.

Also, he added such stories have been deliberately keeping hidden.

Also, he has also a YouTube channel with the name, Andy Bell Is Torsten with more than 159.7k views.

You may also read the bio of Avery Singer, Carey Hart, and Frankie Cosmos.