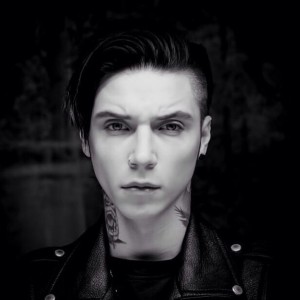 We truly believe with hard work, dedication and perseverance, we can become the best at what we do. No one wants to become mediocre

The pen and the written word hold a great deal of power.

Andy Biersack and Juliet Simms have been married for 11 months since 15th April 2016.

Andy and Juliet are happily married together.

Who is Andy Biersack?

Andy Biersack is an American Singer and Pianist. He is also known as Andy Six. He is the founder and lead vocalist for American rock band Black Veil Brides and is its only remaining original member. Andy started a solo music project under the moniker Andy Black and released his debut album The Shadow Side in 2016.

Andy Biersack was born in Cincinnati, Ohio on December 26th, 1990. His nationality is American and ethnicity is North American.

His birth name is Andrew Dennis ‘Andy’ Biersack. His mother’s name is Amy Biersack and father’s name is Chris Biersack. When Andy was young, he was the “outcast” as you could say among many.

As a kid, he was overweight and decided to lose weight. At age 13, suddenly, the “emo’ fashion came into play. There is no information on his siblings.

He was bullied during his childhood days because of his weight and his nature. But he surpassed all the bullies and made his career in what he was interested.

For his early education, Biersack attended a Catholic Elementary School, which he has spoken of in many interviews. His preschool teacher was Jamie Peters, who had a big influence on is creativity.

For High School, Andy attended Cincinnati’s School for Creative and Performing Arts and majored in drama and vocal music. He left school before graduating to move to Los Angeles in hopes of furthering his potential career.

At age 14, Andy Biersack and few of his friends formed their band, called “Biersack”(although they only played one show). The project eventually grew into what would later be known as Black Veil Brides. In September 2009 Black Veil Brides signed with the independent label StandBy Records. The writing process for a tour and record began immediately.

In 2009, they released their first music video for “Knives and Pens”, which to date has garnered over 200 million views. The band embarked on their first US tour, titled “On Leather Wings’. Their debut album, We Stitch These Wounds, was released on July 20, 2010, and sold over 13,000 copies in its first week, ranking at no.36 on the Billboard Top200 chart and No. 1 on the Billboard Independent Chart.

The band second studio album, “Set the World on Fire” was released on June 14, 2011, through LavaMusic/Universal Republic Records. The band’s third album, Wretched and Divine: The Story of the Wild One, was released on January 8, 2013. The fourth and the most recent self-titled album was released on October 27, 2014.

On May 2014, Andy revealed to Kerrang! Magazine that he had been also working on new music outside of Black Veil Brides under the moniker  “Andy Black”. On May 19.2014 he premiered his first song titled “They Don’t Need to Understand”’ online with a music video via Hot Topic.

On March 17, 2016, Andy announced the title of first Andy Black album The Shadow Side, Scheduled to be released on May 6, 2016. The lead single from the project, “We Don’t Have to Dance” was released on March 18, 2016, with a music video for the song being released on March 21.

After his move to Los Angeles, California, he took up acting for a short time. He has a small part in the AT&T commercial “Confetti” as well as a 30-second spot in the Montana Meth commercial “jumped”. Andy guest stars in the Funny or Die web series Average Joe on YouTube. He also starred in the Blacked Veil Brides full-length featured film, Legion of the Black, which was released on January 6, 2013, to support the band’s third album.

Andy has suffered a few stage injuries while performing with Black Veil Brides, most notably his from a 15-foot (4.6) pillar on June 18, 2011, in Hollywood which resulted in 3 ribs shattered (3 lower left) and one displaced.

Andy Biersack has a Net worth of $4 million but his salary is not revealed yet.

There was a rumor of Andy Biersack and his wife Juliet Simms issue statements following airplane arrest and also rumor of beating Andy by his wife.

Andy confirmed that it was just a rumor or conjecture that “ I will definitively state that we have a happy and harmonious marriage”.

Andy has a height of 6 feet 4 inches. His body weighs 68kg. He has Dirty Blonde hair and blue eyes.

Jaden Smith is the hottest vegan celebrity this year and he holds the place with Chloe and Halle!