He played college football at the Texas Christian University (TCU).  The Bengals selected him in the second round of the 2011 NFL Draft. 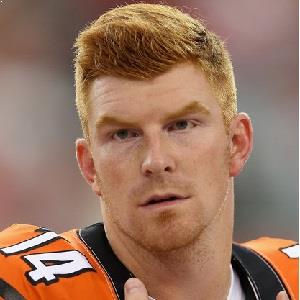 Not everything is going to go exactly as you plan. It's what you do when everything breaks down.

What is the relationship of Andy Dalton?

Andy Dalton is a married man.

They began dating when they attended TCU together.

The Daltons founded the Andy & Jordan Dalton Foundation in 2011.

The pair’s marriage is going strong as there is no news regarding any extramarital affairs.

Who is Andy Dalton?

Andy Dalton is an American football quarterback for the Cincinnati Bengals of the National Football League (NFL).

The Bengals selected him in the second round of the 2011 NFL Draft.

Dalton was born in Katy, Texas on October 29, 1987, as the son of Gregory Jerome Dalton and Tina Denise (Payne) Dalton.

He became interested in the world of football in his early life.

He is of American nationality. Furthermore, he belongs to a mixed ethnic background of English and others.

He split time as a junior in 2004 and then started only one full season at quarterback for Katy High School as a senior in 2005.

Talking about his professional career, On April 29, 2011, the Bengals selected Dalton with their second-round pick, 35th overall, in the 2011 NFL Draft.

Dalton’s first NFL regular-season start came on September 11, 2011, on the road against the Cleveland Browns.

On November 3, 2011, he was named the NFL Offensive Rookie of the Month for October.

In 2013, Dalton finished the regular season with 4,293 passing yards for 34 passing touchdowns, 20 interceptions, and an 88.8 passer rating.

More recently, Dalton threw three interceptions in the first half during the home opener against the Baltimore Ravens in Week 1.

Furthermore, he has an estimated net worth of around $22 Million.

Dalton became part of the controversy due to the rumors of the change in the quarterback of the Bengals.

This news emerged after the Bengals’ 0-2 loss at the start of the 2017 season.

Furthermore, some of the fans suggested the benching of Dalton in the next week. At present, there are no rumors concerning his life and career.

Talking about his body measurement, Dalton has a height of 1.88m.

Additionally, he weighs 99.8 kg. Furthermore, his hair color is brown and his eye color is light blue.

Dalton is active on social media.

In addition, he has more than 170k followers on Instagram.

Similarly, his Facebook fan page has more than 7k followers.