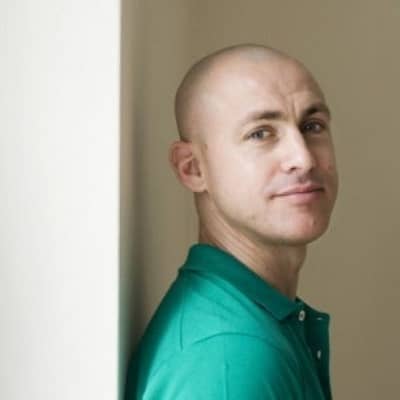 Andy is married to Lucinda Puddicombe and together they are blessed with a son named Harley. Currently, the family is living in Venice, California.

Puddicombe revealed in 2013 that he was undergoing testicular cancer therapy. He revealed how mindfulness had allowed him to deal with the physical, emotional, and behavioral effects of the disorder in an interview with the Guardian newspaper.

Who is Andy Puddicombe?

Andy Puddicombe is a British writer, public speaker, and mediation and mindfulness instructor. Together with Richard Pierson, a digital wellness organization that provides its customers with guided meditation instruction and mindfulness, he is the co-founder of Headspace.

Puddicombe is a retired Buddhist monk who has a Circus Arts degree.

He was born in London on 23rd September 1972. He was raised in Bristol, UK. he follows the Buddhism religion. he is a British citizen.

Details about the parents of Puddicombe are not available to the public and whether he has any siblings is also not known.

He gave up his study in sports science in 1994 and later decided to move to Asia to study as a Buddhist monk. He went to India, Nepal, Myanmar, Thailand, Australia, and Russia for his meditation practice, resulting in complete ordination at a Tibetan monastery in India, in the Himalayas.

After completing a one-year meditation in Scotland, he returned to Russia, where he spent four years studying meditation in Moscow. After four years, he left the monastic commitment.

He moved back to the UK in 2004, where he studied Circus Arts in London. He was establishing his own private meditation practice in the town at the same time. Andy aimed to make meditation and mindfulness readily available, meaningful, and helpful to as many people as through his private practice.

Puddicombe began a private mediation practice in 2006, where he worked as a mindfulness instructor for the next four years. The language and methods he had previously studied were also adapted by him. At that time, he met Rich Pierson, his future business partner and co-founder of Headspace.

Puddicombe delivered a TED talk entitled ‘All It Takes Is 10 Mindful Minutes,’ which explained the positives of taking time out to practice mindfulness every day. It has accrued 7 million views to date and was among the first TED Talks on Netflix to be shown.

Andy was the writer of three books. The books are now published in 10 languages in 25 countries. Appearing in Vogue, NYT, FT, Entrepreneur, Men’s Wellness, and Esquire, Poddicombe has been prominently featured in the international press. He has also been featured on BBC, Netflix, and TED and has made regular TV and online appearances.

Andy had a long career nearly two decades in the public speaking industry. Puddicombe has been able to acquire a modest fortune from his work as an author, public speaker, meditation, and mindfulness instructor. it is estimated that Puddicombe has a net worth of about $40 million.

So far Andy has not been dragged or involved in any controversy or scandals.

Andy is average in height and medium in weight. Details on his exact height and other body measurements, however, are not publicly available. But he has a perfect body shape which reflects him as a handsome man. He doesn’t have hair but he has a pair of black eyes.

He is active on social media accounts and a bit famous also on networking sites, he has successfully gained 56.3 k followers on Instagram, on Twitter he has 92.5 k followers, he is on Facebook too but unfortunately, the page is not available at the moment.

You may also like to read the bio, career, net worth, education, love affair, rumors, social media of Mike Holmes, Laurie Dhue and, Aimee Mullins.