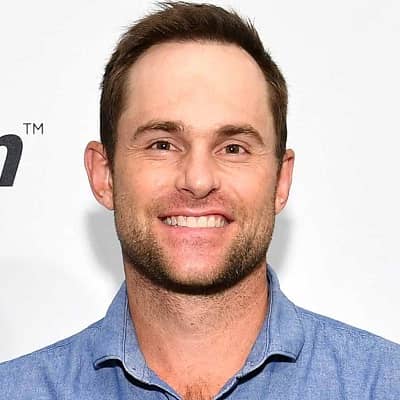 Elmo's a very important person in my life. You've got to have Elmo's respect. You don't want to piss him off. - after tripping to get a Elmo doll in the stands in the Australian Open.

Andy Roddick is happily married to Brooklyn Decker now. His wife is a Sports Illustrated swimwear model and actress.

Andy first saw her on the CNN/Sports Illustrated website and made his agent contact her agent for a chance to meet. The two began dating in September 2007 and announced their engagement on his website on March 31, 2008.

The couple married on April 17, 2009, in Austin, Texas. They are now blessed with two children, son Hank Roddick born on  September 30, 2015, and daughter Stevie Roddick born in November 2017.

In 1998, Andy was dating fellow tennis player Ashley Harkleroad. Their relationship lasted for about 2 years.

And he was dating actress Mandy Moore from September 2002 to March 2004.

Likely in 2005, Andy was in a relationship with Russian tennis player Maria Sharapova. However, in November 2006, the pair separated.

In 2005, Andy has an affair with the model Lauren Bedford. Likely, his name was also linked with actress Sabrina Aldridge when they were spotted together.

In October 2006, Andy had a brief encounter with socialite Paris Hilton.

Who is Andy Roddick?

Andy Roddick is an American professional tennis player who is now retired.

He is popular for claiming as the men’s tennis world No. 1 player in 2003 after defeating Juan Carlos Ferrero of Spain at the US Open finals.

He was born on August 30, 1982, in Omaha, Nebraska, United States. He was grown up with his two older brothers; Lawrence Roddick and John Roddick who is a former professional tennis player.

Andy was inspired to play tennis bu his brother, John. The brothers used to have fun playing tennis at a young age and later he pursued it as a career.

Talking about his education, he studied at the SEK Boca Prep International School and graduated in 2000.

Andy completed his high school at the University Of Nebraska High School. He attended online classes.

Andy Roddick has been playing tennis since a young age. He finished at no. 6 in the US Junior and at No. 1 in 2000. Furthermore, he also won the US Open and Australian Open Junior Singles titles.

He started his senior tennis debuting at the USA F2 Futures tournament in May 1998. Likely his professional career began in the year 2001 defeating Fernando Vicente at the ATP level.

In 2002, he also made his first TV show appearance on the family comedy fantasy series Sabrina, the Teenage Witch. He also reached the major Grand Slam finals in 2004, 2005, and also in 2009.

Furthermore, he was also in the US Open in the year 2006. Moreover, there he was defeated by Roger Federer. And at the age of 21, he became World no. 1 player. He was the youngest and he was the first Americans to do so.

In 2005, he was the first to be the winner of the SAP Open. Reaching the semi-finals in the 2007 Australian Pen, he gets defeated by Rodger in straight series.

He ended his professional career with 34 titles in singles and 4 titles in doubles. Andy was a part of the International Tennis Hall of Fame. on July 22, 2017.

Roddick has earned 32 titles, 600-plus match wins in his career. Likely he was at No. 1 in the 13 weeks and in the Top 10 in the nine straight seasons.

In the year 2004, he was awarded the ‘Best Male Tennis Player’ by ESPY Award. He has held the fastest serve in the U.S. The player made history serving at about 244 km/h (152 mph) playing against American Scoville Jenkins, and Spaniard Rafael Nadal.

He was the World No. 1 tennis male player in 2003 after defeating Juan Carlos Ferrero of Spain at the 2003 US Open finals. Furthermore, he has earned different victories and honors.

Andy has his own entitled foundation, ‘Andy Roddick Foundation‘. It was built in 2000 when he was just 17 yrs old. The organization was opened with the objective of raising money to improve the lives of children and families.

It also has different programs in expanding high-quality education and enrichment for the needed ones.

Andy has also endorsements with multiple brands including the nationals and international too. They include Lacoste, Travis Mattew Apparel, Babolat, American Express, Lexus, Rolex, Microsoft, Arizonans Beverage Company, Powerade, and many others.

The player has also invested in a golf apparel brand called Travis Mattew Apparel. Being its brand ambassador, he co-owns the company in 2013.

Andy and his wife have owned and sold different properties. The North Carolina mountain retreat was sold for $2.35 million in 2013. And likely, their five-bedroom Los Angeles home for roughly $3.34 million in 2015. Just in 2019, they sell 15-Acre Austin property for $4.65 million.

The player has not let himself through any sort of controversy and kept himself away from other rumors as well.

Talking about his appearance, he has light brown colored hair with hazel eyes.

To know more about Dawid Celt, Steffi Graf, and Dominic Thiem, please click on the link.