Andy Ruiz Jr. is a Mexican-American boxer who is well known for challenging for the WBO heavyweight title in 2016. He is married and a father of four. 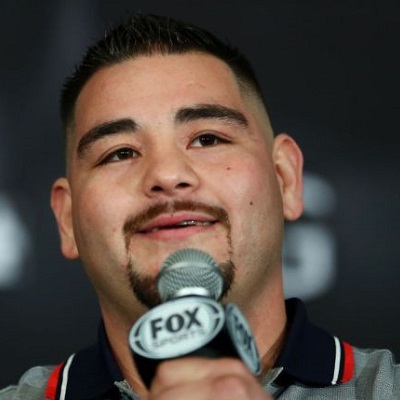 People need to understand that I came this far being chubby and all that. Imagine how far I could go actually being in good shape and looking good.

It's a natural blessing. Thanks to God. He gave me this ability of being chubby but still being fast and being able to hit hard.

Don't even bring Drake around me!

What is the relationship of Andy Ruiz Jr.?

Andy Ruiz Jr. is a married person. He is married to his longtime girlfriend but he has not revealed much about his relationship but it is known that he is happy with his wife.

Who is Andy Ruiz Jr.?

Andy Ruiz Jr. is a Mexican-American boxer who is well known for challenging for the WBO heavyweight title in 2016. He is the first boxer of Mexican heritage to become a world heavyweight champion.

He was born on September 11, 1989, in Imperial Valley, California, USA. His birth name is Andrés Ponce Ruiz Jr. and he is currently 32 years old. He was born to father Andres Ruiz but his mother’s name is unknown.

His parents had immigrated to the US from Mexico and his father worked as a construction worker and later started his own business flipping houses. He was noted by his father and this motivated him to become a full-time boxer. In addition, he has three sisters.

Andy holds American and Mexican citizenship but their ethnicity is unknown.

He has not disclosed any information regarding the educational institution names he attended.

He represented Mexico in two games at the 2008 Beijing Olympics Games Qualification tournaments but lost to Cuba’s Robert Alfonso and Colombia’s Oscar Rivas.

At the age of 19, he began his professional career and his debut match was at the Plaza de Toros in Tijuana, Baja California on March 28, 2009, against Miguel Ramirez. Ans he won the fight with the first-round Knock-Out.

Likewise, he defeated Joe hanks in 2013 and won the WBO Inter-Continental heavyweight. Recently, he has fought with Joseph Parker in December 2016, Ray Austin in May 2016, Devin Vargas in 2018, and Alexander Dimitrenko in 2019. On June 1, 2019, he defeated the unbeaten Anthony Joshua.

He has an estimated net worth of around $10 million as of 2022, and he has earned that sum of money from his professional career.

Andy has been successful in keeping himself far from rumors and controversies in his personal and professional life.

Andy has brown eyes and black hair. He stands a height of 6 ft. 2 inches and he weighs 116 kg. But, other information regarding his shoe size, dress size, etc. are not available.