Aneurin Barnard is a well-known Welsh actor. He has played as Davey in Hunky Dory, likewise as Claude in The Truth About Emanuel, and Robert "Bobby" Willis Jr. in Cilla, and King Richard III in The White Queen. Aneurin Barnard is married to Lucy Faulks and a father of one. 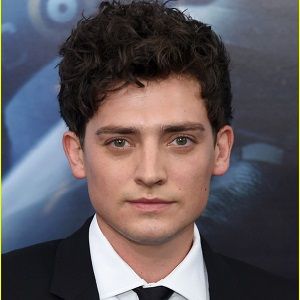 whether it's a TV series or feature film, I enjoy it and I like changing constantly.

One thing I learnt was that you don't have to spend all day shooting: you can get it done in half an hour if you're that talented as a cameraman.

It's so much nicer to be able to do your job with someone who's helping you, and you're helping them. Then, it becomes a tennis match where you're hitting the ball back and forth, and you're a team.

Aneurin Barnard is married to Lucy Faulks since 2017. Now they are blessed with a child.

Previously, he dated Amy Morgan, the Welsh actor. They are also spotted together in different places. However, they broke up shortly.

Who is Aneurin Barnard?

Aneurin Barnard is a well-known Welsh actor. He has played as Davey in Hunky Dory, likewise as Claude in The Truth About Emanuel, and Robert “Bobby” Willis Jr. in Cilla, and King Richard III in The White Queen.

Aneurin was born on 8 May 1987, in Ogwr, Mid Glamorgan, Wales, UK. His father’s name is Terry Barnard, who is a factory worker and works as a coal miner.

He has a sister named Ceri. His mother June Barnard also used to work in a factory.

He attended his secondary education from Ysgol Gyfun Llanhari in Rhondda Cynon. After that, he completed his education and had training from the Royal Welsh College of Music and Drama.

It is the renowned institute for learning music and acting and he graduated from the same college in 2008.

Aneurin Barnard got to be on TV and Cameras at the young age of 11 when he got a chance to work in HTV’s show. The show was called ‘Jacob’s Ladder’. He played the role of Young Jonathan in this series. In 2007, he started the role of Demien in the short movie Owl Creek Bridge. The show received a great response from the audience and was widely appreciated.

In 2011, he appeared in the movies and short movies like Elsewhere, Powder, Ironclad, and many more.

He played the role of Davey in the movie Hunky Dory he was well known in the film industry and got his recognition. He is also famous for his role in the movie The Devil’s Harvest. Likely he played Magna Carta in the movie Ironclad.

In 2011 Barnard played in the movie Hunky Dory alongside Minnie Driver. The film is very unique as it was all set in 1976. In the movie, Barnard had played the role of Davey and in the film. Not that much he has also sung songs from the era such as David Bowie’s “Life on Mars” and “The Who’s “Love Reign O’er Me”.

In January 2012 Barnard also was seen as photographer David Bailey in the television film “We’ll Take Manhattan” alongside Karen Gillan. He also appeared in the horror movie. Barnard then gets to play the lead role in Vertigo Films’ Guinea Pigs, a micro-budget horror film.

Likewise, he is also seen in the fantasy adventure movie The Adventurer: The Curse of the Midas Box. In this movie, he is seen playing the title role of Mariah Mundi. The movie was released in 2014. Again he has his comeback in 2013 featuring in the movie Trap for Cinderella which is directed by Iain Softley. It is said that the film is based on a book written by Sebastien Japrisot.

In 2014, Barnard is seen playing the role of Charles Knight in the upcoming science-fiction film Grotesque where Nicholas Hoult, Alex Reid, Ivan Dorschner, and Allen Leech are also seen with him. He will also appear in the film The Devil’s Harvest. He also played the part of Liverpool Music Manager Bobby Willis alongside Sheridan Smith in the drama Cilla focusing on the early life of Cilla Black and her rise to fame.

In 2016 he was seen in the television show reviews War and Peace written by Leo Tolstoy. He is seen there as Prince Boris Drubetskoy. The show was broadcast on BBC. Moreover, he also played Tim Hobson in the drama named thirteen.

Aneurin also won many awards. The first award with which he was honored was the Laurence Oliver Award. He received this award in 2010 for his amazing performance in Spring Awakening.

His second award is that award which he received as the Best Actor award in Puchon International Fantastic Film Festival 2012. In 2013 he was awarded Best Acting Ensemble in Ashland Independent Film Award. He won this award for his work in ‘The Truth About Emanuel’.

Currently, there are no desperate rumors regarding his personal and professional life. It seems he is doing his best job without harming others and has been a private person in his life, for which he has not been in any controversy yet.

Aneurin Barnard has a perfect body standing at 5 feet 9 inches in height. He has got green-colored eyes and dark brown colored hair. His shoe size and weight are unknown.

But there is the fan-made page and they also have got many followers.