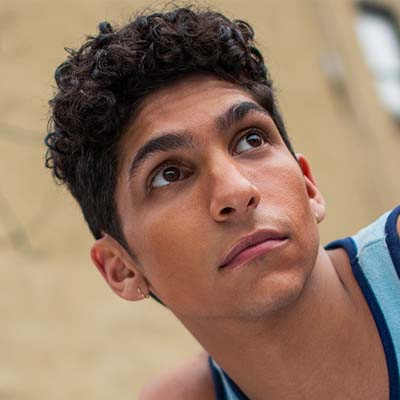 “I love these people, you know?” Angel says, retreating a little into a burgundy sweater, sat cross-legged on the floor of his apartment. “I very much feel like a kid that's being sent off to college now. I spent so much time with that family and now it's like, ‘It's time for you to grow up now. Go and do other things, and that's exciting but you're also like…”

Angel Bismark Curiel is happily relationship with Pose Produces, director, and writer Janet Mock. In 2019, the couple started dating each Other. Probably, they first met at the show because Janet is the show director of the Series “Pose”. According to Angel, it was difficult to express his feeling to Janet, but somehow he manages to purpose her.

Nowadays, both couples can see together at conferences and vacation together.

Who is Angel Bismark Curiel?

Angel Bismark Curiel is a Dominican American Actor. He appeared in Series like Pose as Lil Papi Evangelista made him famous, Monsters and Men, and Night Comes On.

Angel was born on October 16, 1995, in  Miami, Florida, United States. At the age of seven years, he moves to Liberty City with his mother and sister.

The identification of his parents and siblings hasn’t been disclosed yet to the public.

He attends Miami Arts Charter School where his behaviors and absence made him trouble in classes. He completed his studied drama education at Pace University and moved to New York City after graduating.

Curiel was in college when he plays a role in the film, America Adrift. In 2016, the film is featured at the International Puerto Rican Heritage Film Festival. He appeared for roles in indie and short films like Louie’s Brother Peter, Night Comes On, Night Comes On, and Monsters and Men in the years 2018.

Angel left the cast member after 3 years on FX’s drama series Pose when he is in college at Pace University.

In 2019, Curiel was nominated for Best Supporting Actor in for Imagen Award for his role Lil Papi Evangelista on FX’s Pose.

His estimated net worth is around $1 million – $5 million. He has not disclosed his Salary and earnings yet from his acting journey.

Angel Bismark Curiel’s height is about 5 feet 7 inches and his weight is around 68 kg. He has black color and undercut hair.