Angel Coulby is an English actress. She is in a relationship with actor Bradley James. 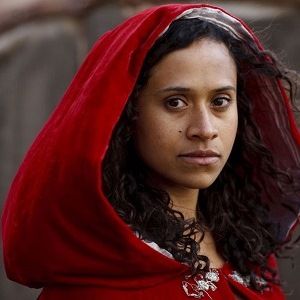 You just do it, it’s like another part of the job. And, you know, Bradley and I, we’re mates. So, we just kind of got on with it and did it really. I think Bradley really enjoyed it

Angel  Coulby is an unmarried woman. She is in a relationship with actor Bradley James since August 2011. Their friendship and on-screen chemistry blossomed into real-life romance, and the couple has been going steady since 2011.

They are regularly seen in each other’s company. Bradley was previously involved with Georgia King. But the relationship didn’t last long so they separated.

Who is Angel Coulby?

Angel Coulby is an English actress. She was nominated for Monte Carlo TV Festival Award for her brilliant performance in ‘Merlin’, in the category of Golden Nymph Outstanding Actress for Drama Series.

Angel Coulby was born in Islington, London, England on  August 30, 1980, and she is currently, 38 years old. Unfortunately, there is no information regarding his family and her childhood. It is under review.

There is no information about her siblings. Angel holds British citizenship and mixed (African-Guyanese- English) ethnicity. Her birth sign is  Virgo.

She finished her studies from the Queen Margaret University for a degree in acting. The actress was also been active several dramas from her student life and has also involved in several acting pieces of training.

She debuted television series from ‘Scariest Places on Earth’, where she played a student who encounters a ghost, went unnoticed. During 2003, she also performed the role of Pippa in the comedy-drama series ‘Manchild’. During 2004, she played Amber in seven episodes of ‘As If’, which was also a comedy-drama. That year, she played Jemma Ryan in six episodes of ‘Conviction’, a crime drama premiered on BBC Three.

She also played Maxine Framley in the episode ‘A Good Day to Bury Bad News’ of the medical drama TV series ‘Holby City’ in 2004. Likely, she portrayed Gillian Lafferty in seven episodes of the popular crime drama ‘Vincent’ in 2005. Angel also played the main role of Guinevere “Gwen,” a maidservant who later became the Queen of Camelot, in the fantasy series ‘Merlin’.

She played the main role of Tanusha ‘Kayo’ Kyrano in ten episodes of ‘Thunderbirds Are Go’, which started in 2015 and continues to date. During 2016, she was seen in two series—‘Undercover’ and ‘Hooten & the Lady’. Besides that, she did one episode of ‘Man in an Orange Shirt’ in 2017. Currently, she would be seen playing Detective Cathy Hudson in the TV series ‘Innocent’, which is still in the post-production stage.

She was nominated for Golden Nymph Award for Outstanding Actress – Drama Series for Merlin (2008). Likely, she won Broadcasting Press Guild Award and the International Emmy Award for ‘The Tunnel.

There is no information regarding her income, salary. Additionally, her net worth is estimated to be around $ 5 million according to the sources.

Angel’s unique body features are her mole on the right cheek and curly hair. She has a height of 5 ft 4 inches and she weighs 48 kg. Angel has light brown hair and light brown eyes.

Also, read the affair, salary, the net worth, controversy, and the bio of  Mia Goth, Aimee Lou Wood, Juno Temple.