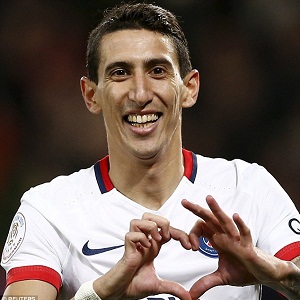 It hurts when you're always doing your best for your club, and then you hear that you might be going to Tottenham

It does not bother me that £60m has been paid for me. I come here to work and play for the club and to do the best I can for Manchester United

My dad worked all day. He would get up at five in the morning and didn't stop working until 10 at night, every day the same.

He married Jorgelina Cardoso 0n 30 July 2011. Together they have a daughter, Mia, who was born three months premature and survived after treatment at an intensive care unit at the Hospital Universitario Montepríncipe in Madrid.

Who is Ángel Di María?

Ángel Di María is an Argentine professional footballer who plays for League 1 club Paris Saint-Germain & the Argentina national team. After winning the Champions League with Real Madrid, he signed for Manchester United in 2014 for a British record £59.7 million but joined PSG a year later for around £44 million.

His birth name is Ángel Fabián Di María Hernández. He was born as 1 of 3 children of Miguel(father) and Diana(mother). He was raised in Perdriel. As an infant, he was unusually active, & on the recommendation of a doctor was signed up for football at 3.

He also helped his parents with their work at a local coal yard along with his 2 sisters. Due to the low income, his family earned, purchasing football boots & keeping up with his hobby was difficult for his parents. After being transferred to Benfica, he asked his father not to work anymore & bought a house for his parents & sisters.

At 4, Di María joined Rosario Central. As he had already committed to playing for his local club, Torito, 35 footballs were given in compensation. Di María made his professional debut on 14 December 2005 in a draw away to Independiente. He scored for the first time on 24 November 2006 in a win at home over Quilmes. After playing at the Under-20 World Cup in Canada, Boca Juniors made a bid of US$6.5 million for him. He was also approached by Arsenal, a move that fell through due to UK’s strict rules on issuing work permits to players from outside the EU.

Di María was transferred to Benfica in July 2007. Benfica paid Rosario Central €8 million. He signed a new deal with Benfica in October 2009, adding 3 more years to his current deal, which was to last until 30 June 2015 with his release fee set at a minimum of €40 million. On 27 February 2010, Di María scored his first hat trick in a win against Leixões. The next day, he made the headlines as “Magic Tri María” in all sports newspapers in Portugal.

On 28 June 2010, Real Madrid posted on their website that they had come to terms with Benfica for the transfer of Di María. He signed a five-year contract for €25 million, plus €11 million in incentives. Di María made his debut on 4 August 2010 in a friendly match against Club América. On 22 August, he scored his first goal in another friendly away against Hércules. His league debut came on 29 August, in a 0–0 draw against Mallorca.

Di María scored his first goal of the season against Barcelona in the first leg of 2012 Supercopa de España. Although he did not have the best season, he contributed in big moments. On 9 August 2012, he signed a new contract with Real Madrid, for until 2018. On 2 October 2013, he scored 2 goals against Copenhagen in Champions League.

Later In the 2014 Champions League Final, he dribbled past 3 players before producing a save from Thibaut Courtois; his teammate, Gareth Bale, was there to head the rebound into the net in the 110th minute, giving Real Madrid a 2–1 lead over Atlético Madrid in an eventual 4–1 win. He was named a man of the match. He was an unused substitute as Real Madrid won the 2014 Super Cup against Sevilla on 12 August.

Since 2015, this talented player is playing for Paris Saint-Germain team.

While his salary is not known, he has a net worth of $22 million.

There are no much significant rumors and controversies regarding him, except for some injury and transfer rumors.

Angel Di Maria has a height of 5 feet 11 inches. His body weighs 70kg. He has dark brown hair and dark brown eyes.

You may also like to read about education, early life, career, affairs, body stat, and social media of Leo Gregory, Paul Kemsley, and Gareth Bale