Reflecting on the personal life of Angel McCoughtry she is lesbian. She has posted many pictures of herself with her fiancée on Instagram. In one photo she has written “Yes we been discriminated against! We lost friends! Family members are upset! They said I disgraced my religion! One thing I do know is that LOVE is a great feeling! My last overseas team threatened my job if I didn’t write a fake letter on social media saying my relationship was a lie.

But all I know is, Love is a great feeling! I understand we all judge and it’s in human nature, but the more I speak to God I never feel judged in front of the man upstairs, even tho he has all the power too! Although she is engaged there isn’t much information regarding whom she engaged and when. Being a celebrity, her fans are more curious to know more about her. 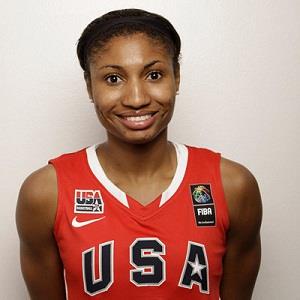 Who is Angel McCoughtry?

McCoughtry studied at Saint Frances Academy and later transferred to The Patterson School in Lenoir, North Carolina. After complicating her high school, she joined the University of Louisville. She seemed to be a pretty private person who hasn’t revealed much regarding her personal life. There isn’t much information about her parents and early life.

Talking about the career journey of Angel McCoughtry, she started playing basketball professionally in 2009 and she is still active in it. She started playing basketball professionally after being selected by the Atlanta Dream as the first overall pick in the 2009 WNBA draft. Soon she began earning a name for her outstanding athleticism and was also named the Rookie of the Year in 2009.

In 2011, she was voted as a WNBA All-Star for the first time in her career. She led her team Atlanta Dream twice in the WNBA finals but was unable to win the title. She was suspended from the team for unspecified reasons during the 2012 season. She signed a multi-year contract extension with the Dream in 2013.

McCoughtry is a national team member of the United States that has won the 2009 UMMC Ekaterinburg International Invitation. She has also earned the MVP honor in the competition. She also won a gold medal at the 2012 Summer Olympics in London. Besides WNBA, she has also played for other international teams including Good Angels Kosice, UNIQA Sopron, Fenerbahce Istanbul, and Mersin Buyuksehir Belediyesi.

She signed with the Dynamo Kursk of the Russian Premier League in August 2016 and has won the 2017 Euroleague with the team. Her success in her career path has paid her well financially. Her net worth varies depending on various sources so for now, we can say that her net worth has grown significantly.

Unlike other players, she hasn’t been in rumors but she suffered a controversy when she planned to rest during the 2017 season.

She has a height of 6 feet 1 inch with a body weight of 70 kg. Her hair color is black and her eye color is also black.