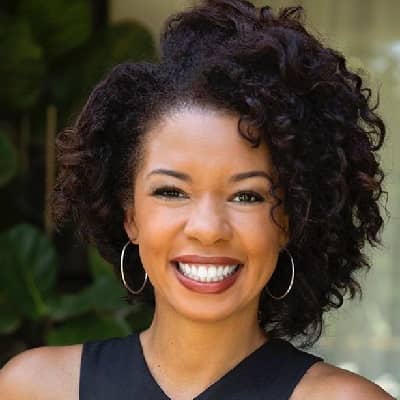 Angel Parker is living a blissful conjugal life with two children. She got married to an actor Eric Nenninger. The couple met while studying at The American Academy of Dramatic Arts and dated for a while before being mates.

On August 10, 2002, the duo tied the knot with each other. Together they have two children a son named James Nenninger and a daughter named Naomi Nenninger. Currently, she lives in Los Angeles with her husband and two children.

Who is Angel Parker?

Angel Parker is an American famed actress and voice artist. She is best known for appearing on the Disney XD sitcom Lab Rats where she portrayed the role of Tasha Davenport.

Angel was born in the city of Los Angeles, California, the U.S. on the 17th of October 1980. Later on, she relocated to San Clemente, a small beach town located in Southern Orange Country with her family.

Talking about her family members, Parker hasn’t yet disclosed her parent’s and sibling’s identities in the media. At the age of 16, Parker enrolled at the American Academy of Dramatic Arts and graduated in the year 1999.

Afterward, she joined the British American Drama Academy where he studied Shakespeare. She holds an American nationality and belongs to the African-American ethnicity.

Angel’s first television appearance was on The WB series “Angel” in an episode of First Impression in the year 2000. In the series, she portrayed the role of Veronica. After then, she gave a voice in the 2004’s third-person shooter video game, Shellshock: Nam ’67.

In 2008, Parker gave voice for two video games titled Condemned 2: Bloodshot and White Knight Chronicles: International Edition. That year, she also appeared in various television series such as Criminal Minds, The Young and the Restless, and ER. Parker guest-starred on numerous television series like Eli Stone (2009), The Closer (2009), Castle (2010), Hannah Montana (2010), Days of Our Lives (2012), and more.

She made her big break after landed a recurring role on Lab Rats/Bionic Island from 2012 until 2016. In 2012, she made her theatrical film debut as Joel’s Mother in Free Samples released at the Tribeca Film Festival. Similarly, her other films are The Female Brain (2017) and Relish (2019).

Furthermore, She has worked with Independent Shakespeare Company and Will & Company. For more than 10 years she performed at the Young Playwrights Festivals in The Blank Theatre.

To date, Parker hasn’t been surrounded by any sorts of rumors and disputes that could hamper her personal and professional life. She has managed to maintain a clean profile.

It is known that Parker has been cast in the ABC drama pilot “National Parks” alongside Billy Campbell. In the series, she will be playing the character of Ava Longridge, the ISB’s inquisitive intelligence analyst who gathers and studies evidence to assess potential threats inside of the parks.

Angel might have earned an impressive amount of wealth throughout her successful career as an actress. Besides, she has done various endorsements for top brands such as Jiffy Lube, Honda, McDonald’s, Publix, Nissan, Pizza Hut, Sprit, Ronzoni Bistro, and so on.

However, she hasn’t yet revealed her exact net worth, salary, and other income in the media. Nevertheless, she is living a luxurious and blissful life.

The actress has a maintained body posture. She stands at the height of 5 feet 2 inches tall and weighs about 50 kg. She has beautiful dark brown pair of eyes with black hair. Further, there are no details available regarding her other body measurement.