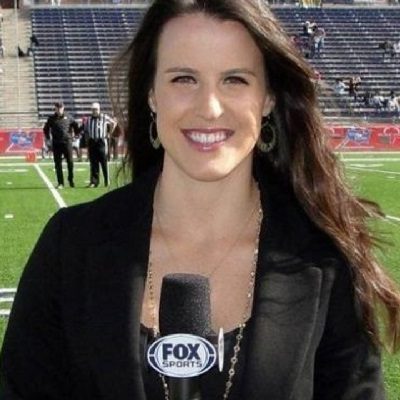 Angela Akins is married to Sergio Garcia. His husband is a Professional Golfer.

Together, the couple is blessed with a daughter, Azalea Adele Garcia.

Who is Angela Akins?

American Angela Akins is a journalist. She is renowned as the wife of the Spanish professional golfer, Sergio García.

Currently, she is associated with the American Sports Channel, Golf Channel.

Angela Akins was born on the 25th of October 1985 in Texas to Marty Akins and Pam Akins. She is of Scottish-Irish ethnicity. As of 2020, she is 34 years old. Also, her zodiac sign is Scorpio.

Her father, Marty is a former quarterback of Texas Longhorns Football. Currently, he is pursuing his career as a politician. She is the youngest among her two siblings. Her elder sister, Tara Akins happens to an athlete too.

Talking about her educational background, she is an alumna of the University of Texas. During junior and senior university days, she used to play golf for the university’s team, Texas Longhorns.

She was also named to All-Big XII Academic Team. Before Texas Longhorns, she used to play for TCU Horned Frogs.

Despite being a quite skilled golfer, Angela Akins never intended to take the game as his professional career. In spite of golf, she chose to be a journalist. After graduating from college, she joined the regional sports network, Fox Sports Southwest.

For the channel, she hosted the shows including Fox Football Friday and the golf lifestyle program, Access Golf. Also, she hosted college football in the Southland Conference. Moving forward, in 2015, she joined the sports network, Golf Channel.

In the channel, she makes her appearance as the interviewer. Besides that, she is popular for covering the PGA Tours. Also, she creates the biographical movies based on the history of Golf.

Talking about net worth, her husband, Sergio has an estimated net worth of $70 million. His net worth is attributed to his career as a golfer and brand endorsements.

As of now, she has maintained her dignity as a journalist. Till the date, she has not been through any sort of controversy and scandals that created headlines in the media.

Besides that, she has also maintained a distance from any type of rumors too.

Angela Akins has brown eyes with brunette hair. She has a decent height and weight. However, details on her body stats are not available.

You may also read the bio of Adam Fleming, Anne Thompson, and Geraldo Rivera.