Angela Bassett is a Black Panther actress. She is married to an American actor, Courtney B. Vance and has two children. 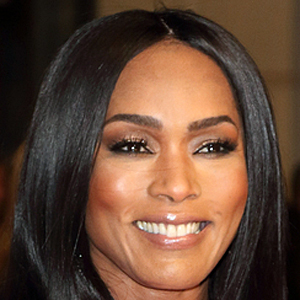 It's important to surround yourself with good people, interesting people, young people, young ideas. Go places, learn new stuff. Look at the world with wonder - don't be tired about it

We all have a gift

we all have a passion - it's just about finding it and going into it. Being an asset to your family and community

When I was in school, my mother stressed education. I am so glad she did. I graduated from Yale College and Yale University with my master's and I didn't do it by missing school.

Angela Bassett is a married woman. She is married to an American actor Courtney B. Vance. The couple got married on 12 October 1997 after being in a romantic relationship for a year.

The couple has been blessed with twins, daughter Bronwyn Golden Vance and son Slater Josiah Vance born on 27 January 2006.

They are all living as one big happy family. Previously, she was also in a romantic relationship with Mark Jenkins.

Who is Angela Bassett?

Angela Bassett is an American Golden Globe-winning actress who is active in the acting industry since 1985.

She is best known for her appearances in What’s Love Got to Do with It, Waiting to Exhale, Notorious, The Jacksons: An American Dream, Malcolm X, and Black Panther.

The daughter of Betty Jane and Daniel Benjamin Bassett, Angela was born in New York City, New York, on 16 August 1958, as Angela Evelyn Bassett. She has a younger sister D’nette with whom she grew up with.

She is of African American ethnicity and has American nationality. After the separation of her parents, her mother took both of the children to live with her grandmother in St. Petersburg, Florida.

Bassett studied at Boca Ciega High School and attended Yale University where she received her bachelor’s degree in African-American studies. She earned a Master of Fine Arts degree from the Yale School of Drama.

Talking about the career journey of Angela Bassett, she is active in the entertainment field since 1985 and she is still active in it. She is a Golden Globe-winning performer who rose to conspicuousness playing outstanding African-American social figures like Katherine Jackson in the television mini-series “The Jacksons: An American Dream”, as Tina Turner in the 1993 biography drama “What’s Love Got to Do with It“.

She made similarly convincing portraits of independent modern women today’s audiences could relate to in How Stella Got Her Groove Back and Meet the Browns. Angela additionally depicted two all the more genuine women featuring Rosa Parks in “The Rosa Parks Story” and Voletta Wallace in Notorious.

The famous parts that she played, her expressive face, and sheer excellence all added to her getting to be noticeably one of Hollywood’s most conspicuous African-American actresses appreciated by the black community.

On 20 March 2008, Bassett received a Star on the Hollywood Walk of Fame at 7000 Hollywood Boulevard in Hollywood, California. On 13 July 2013, she was initiated as an honorary member of Delta Sigma Theta sorority. She is also a philanthropist.

She is a dynamic supporter of the philanthropy Royal Theater’s Boys and Girls Club and she was named a UNICEF representative in 2003.

Her success in her career path has paid her well financially making her net worth estimated to be $20 million.

She was rumored to be Bryan Fuller’s new Starfleet captain.

She revealed her 15-year-old daughter Bronwyn Vance is dating.

Angela Bassett has a height of 5 feet 4 inches with a bodyweight of 52 kg. Her hair color is black and her eye color is dark brown.

Oscar 2021; Best Dressed Stars On The Red Carpet You Don’t Want To Miss!

“Everyone has a past. I try not to let that affect the way I see them, I want to get to know who they are today.” -Jurnee Smollett-Bell an American actress Living her dreams!