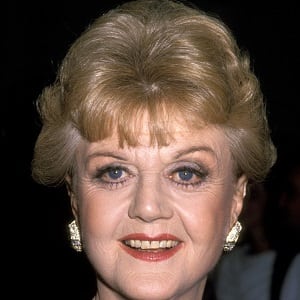 Actors are not made, they are born.

I've had an incredible relationship with my husband, with my family. I know they've had problems of their own, but we have never wavered in our closeness as a family. I've had a hell of a life.

I just stopped playing bitches on wheels and peoples' mothers. I have only a few more years to kick up my heels!

Providing I can put one foot in front of the other, I will continue to act.

Angela Lansbury was previously married to actor Richard Cromwell. The pair married in a small civil ceremony on September 27, 1945. Angela later married another actor Peter Shaw. The pair were together from 12 August 1949 until Peter’s death on 29 January 2003. They have two children together: Anthony Pullen Shaw and Deidre Angela Shaw.

Who is Angela Lansbury?

Angela Lansbury is an English-Irish-American actress. People mostly know her for her role as fictional writer and sleuth Jessica Fletcher in the American whodunit series ‘Murder, She Wrote.’ Additionally, she has also appeared in several other movies and television series including ‘Mary Poppins Returns’, ‘Little Women’, and ‘The Company of Wolves’ among others.

Lansbury was born in London on October 16, 1925. She was born to parents Moyna Macgill and Edgar Lansbury. Her father was an English politician and her mother was an actress. Additionally, she had an older half-sister, Isolde. Additionally, she also has other two brothers, Bruce and Edgar. Angela was exposed to the world of acting at an early age. She is of British, American, and Irish nationality. Furthermore, she belongs to the mixed ethnic background of English, Irish, Scottish, and Welsh.

Talking about her education, Lansbury attended South Hampstead High School and Webber Douglas School of Singing and Dramatic Art in Kensington. Furthermore, she also studied at Feagin School of Drama and Radio.

Lansbury initially appeared in performances of William Congreve’s ‘The Way of the World’ and Oscar Wilde’s ‘Lady Windermere’s Fan.’ In 1944, she had the role of Nancy in the movie ‘Gaslight.’ Additionally, in the same year, she also appeared as Edwina Brown in another movie ‘National Velvet.’ In addition, from 1945 to 1946, Angela had roles in ‘The Picture of Dorian Gray’, ‘The Harvey Girls’, ‘The Hoodlum Saint’, and ‘Till the Clouds Roll By.’ Since then, she has appeared in several other movies and television series. All in all, she has over 100 credits as an actress.

Some other movies and television series that Lansbury has appeared in include ‘Buttons’, ‘Great Performances’, ‘Driving Miss Daisy’, ‘Mr. Popper’s Penguins’, ‘Nanny McPhee’, ‘Law & Order: Special Victims Unit’, ‘Touched by an Angel’, ‘The Unexpected Mrs. Pollifax’, ‘Mrs. Santa Claus’, ‘Mrs. ‘Arris Goes to Paris’, ‘The Love She Sought’, ‘Newhart’, ‘The Shell Seekers’, ‘Shootdown’, ‘The First Olympics: Athens 1896’, ‘A Talent for Murder’, ‘The Pirates of Penzance’, ‘Little Gloria… Happy at Last’, ‘The Mirror Crack’d’, ‘The Lady Vanishes’, ‘Something for Everyone’, ‘The Man from U.N.C.L.E.’, ‘The Amorous Adventures of Moll Flanders’, ‘The Greatest Story Ever Told’, ‘In the Cool of the Day’, ‘All Fall Down’, and ‘Season of Passion’ among others. Apart from her work in movies and television, Angela has appeared in several theatres works and is referred to as the ‘First Lady of Musical Theatre.’

Lansbury has not revealed her current salary. However, she has an estimated net worth of around $ 70 million at present.

Lansbury became part of several controversies due to her comments regarding sexual harassment in November 2017. She had commented suggesting women should accept “some of the blame” in some instances of sexual assaults. Furthermore, at present, there are no rumors concerning Angela and her career.

Talking about her body measurement, Lansbury has a height of 5 feet 8 inches (1.73 m). Additionally, she weighs around 64 kg or 141 pounds. Furthermore, her hair color is blonde and her eye color is blue.