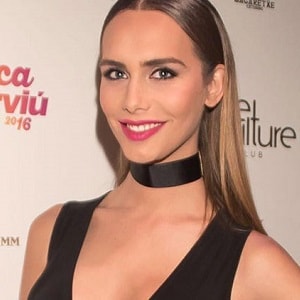 “I don't need to win Miss Universe, I only need to be here.”

Ponce is not married yet and she is not dating anyone in the present. She has not revealed her any relationship status and her dating life. She is currently focusing on her modeling career rather than being in a relationship.

Who is Angela Ponce?

Angela is a Spanish model and is recognized as beauty pageant titleholder. She has won Miss Universe Spain 2018 and she made history as the first transgender woman to be crowned Miss Spain on 29 June 2018.

Angela was born on 18 January 1991, in Pilas, Spain. Her Zodiac sign is Capricorn. Her father’s name is Eustaquio Ponce Moreno and her mother’s name is Maria Jose Camacho Notario. His father and mother are Restauranteur by profession. Her sister’s name is Amanda Ponce Camacho and she does not have any brother.

Her family was very supportive of her decision to go through a gender transplant surgery. She is non-vegetarian and she loves to travel and read.

According to some news, she has a degree in computing but she has not utilized that degree in the profession. Other information about her education is still under review.

It was not that easy for Ponce to make her space in modeling as a transgender model. Fortunately, she got a chance to participate in Miss World Cadiz in 2015 and she became the pageant winner.

After becoming a successful winner, she got numerous offer from magazines like Seville, Vogue Spain, etc. Some Spanish agencies also tried to work with her. With the hope, she took part in Miss WORLD Spain 2018 as a first transgender model and again she did a miracle. She won the competition.

She went to Thailand for the Miss Universe pageant in December and gave a strong performance however she failed to reach top 20.

Ponce has won a couple of awards with her effort and determination. Miss World Cadiz in 2015 and Miss Universe Spain 2018 for her brain and beauty. She made history and inspired all transgender woman.

Angela Ponce: Salary and Net Worth

It has been estimated that she has a net worth of $1 million and it is likely to increase in the future because she has been contacted by several companies.

She has been to controversy in the selection process of miss universe. The winner of Miss Colombia criticized that the beauty pageant like Miss Universe is for women who are born women. And she denied the criticism with the fact with the rules of Miss Universe and she participated in the competition.

Ponce is a tall girl with a height of 6 feet and she weighs 55 kg. She has got blonde hair and light blue eyes. Her breast size is 32 inches, and her chest, waist, and hips sizes are 32 inches, 24 inches, and 34 inches respectively. Her shoe size is 9(US).