Angela Rippon is a divorced woman.

Previously, she was married to an engineer, Christopher Dare in 1967 at the age of 22. The couple ended their relationship with a divorce in 1989. They do not have any children. 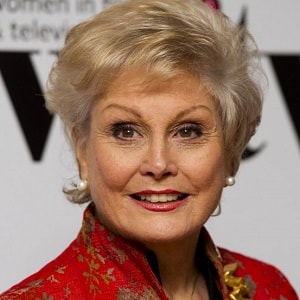 Who is Angela Rippon?

Angela Rippon is an English television journalist, writer, newsreader, and presenter. She is a regular presenter on BBC One’s ‘Nine O’Clock News’ in 1975 and she was the first female journalist permanently to present the BBC national television news.

She also presented the first two series of Top Gear and Come Dancing. She was a co-founder and presenter of the breakfast television franchisee TV-am. She has been co-hosting Holiday Hit Squad alongside Helen Skelton and Joe Crowley on the BBC.

She was born on October 12, 1944, in Plymouth, Devon, England. She is currently 74 years old. Her father’s name is John and her mother’s name is Enda.

Her father was a Royal Marine and she first saw her father in 1947. Her mother worked at a fine china company called Lawley’s and also worked as a seamstress. She holds British citizenship but her ethnicity is unknown.

She started working after she left school at the age of 17. She joined Western Morning News, Sunday Independent, and later BBC local radio and Westward Television as an editor. In 1966, she debuted her television career joining at BBC South West and presenting a national news program on BBC2 in 1974.

After she got the role of news reading on BBC One’s Nine O’Clock News, she became the first female television newsreader. She has a long relationship with BBC. She has been working for more than five decades on BBC. She has hosted several programs and is an active presenter despite her age.

Angela made her guest appearance in the 1976 Morecambe and Wise Christmas show in which she appeared behind a BBC Roadshow at first and emerged to perform a high-kicking dance routine later. She became so popular that she made a cameo appearance in the following year’s show and was revealed to be one of the chorus lines.

She presented BBC television’s Top Gear from 1977 to 1979 and appeared briefly on TV am following its launch in 1983. On July 29, 1981, she co-presented the BBC’s coverage of the wedding of the Prince of Wales and Lady Diana Spencer and BBC One’s coverage of the 1979 UK general election results.

She appeared with Lenny Henry, Samantha Womack, and Reggie Yates in a BBC documentary called ‘Famous, Rich, and in the slums’ in which four celebrities were shown traveling from Kibera in Kenya. The show was run to collect funds for Comic Relief.

She alongside Pady McGuinness co-hosted the ITV Saturday night entertainment series ‘Amazing Greys’ in 2014 but the show lasted for only one series. She co-presented the live coverage of the wedding of Prince Harry and Meghan Markle for Channel Seven alongside Michael Usher and Melissa Doyle in 2018.

Angela wrote a series of children’s books which is based on a fairy tale-like ‘Voctoria Plum’. She has included keep-fit guides in her book including Stay Active, Stay Supple, and Stay Healthy for older people. She is a patron of the Old-Time Dance Society and appointed as the Chair of English National Ballet.

She was appointed Officer of the Order of the British Empire (OBE) in the 2004 Birthday Honours and also awarded an Honorary Doctorate of Arts from Plymouth University in 2012.

Angela was appointed Commander of the Order of the British Empire (CBE) in her role as development lead with Dementia Friendly Communities in the 2017 New Year Honors.

She has around $10 million dollars net worth as of 2022, and her main source of income is from her professional career. She gets an average salary of around $1300 per episode.

There was a rumor about her relationship with Captian Mark Phillips but she denied and told that she was just writing his biography.

She has got brown hair and brown eyes. She has a slim body with a height of 5 ft. 6 inches. Her weight, dress size, shoe size, etc. are under review.

Although she is active in social media, information about her followers is not available.