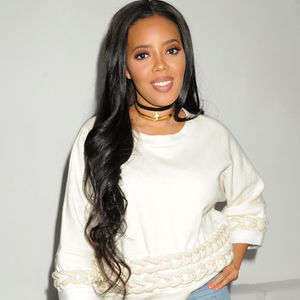 Angela Simmons is currently in a relationship with her fiancé Sutton Joseph Tennyson.

They dated since 2015 and decided to engage in 2016. In the same year, she gave birth to her first child, a son Sutton Joseph Tennyson in Sep 2016.

Prior to this relationship, she dated NBA basketball player Brandon Jennings in 2013 for few months until they decided to split.

Before this, she dated Romeo Miller and Mille Cam Newton in 2012 and 2011 respectively.

Who is Angela Simmons?

Angela Simmons is an American reality star and a business person. She gained a lot of popularity with the series Run’s House.

She was born on September 18, 1987, in Queens, New York, U.S. She belongs to All-American ethnicity.

Angela is the daughter of Joseph Simmons (father) and Valerie Vaughn (mother). Her father was a co-founder of the popular group, Run-D.M.C.

She joined the Fashion Institute of Technology till she dropped out after a year.

Angela Simmons initiated her career appearing on American reality television series, Run’s House along with her family members. As a result, she modeled in the music video, Shortie Like Mine created by Bow Wow.

Moreover, she along with her sister Vanessa opened a footwear shop called Pastry Footwear on March 23, 2007.

Also, she became the executive producer on the reality TV show, Growing Up Hip Hop in 2016. In the show, she also starred alongside stars like TJ Mizell, Kristinia DeBarge, Boogie Dash, and Egypt Criss.

This talented TV star’s estimated net worth was around $7.5 million. She has her faux fur line called Foofi and Bella founded in 2015.

The rumor surfaced where her fiance is cheating on Angela while she was carrying his baby in her belly at that time in 2016. However, this rumor ended just as a rumor.

Angela Simmons has a height of 5 Feet 4 Inches and a weight of 58 kg.

Her hair color is black and eyes are in dark brown color.

The alleged murderer of Angela Simmons’ ex-fiance Sutton Tennyson surrenders to the police and states that he is innocent!